Well, admittedly, it may not be so good to be a Rosencrantz in a Shakespeare play, since not only do you die in the end, you don't even get to die on-stage. Someone walks onto the stage and announces your (and your pal Guildenstern's) deaths.

Still, though, in other instances it can be fine to be a Rosenkrantz. In this specific instance, on display in Frederiksborg Castle in Denmark are four large round carved and painted wooden plaques, all dated to 1535, displaying several Biblical scenes.
But, of course, they also display heraldry! Notably, the arms of the Rosenkrantz family (which we have seen a number of times before in the castle) as well as the arms of several families who married into the Rosenkrantzes.
Here are the four roundels, going from left to right and top to bottom. (They are clearly not in the same order as the Bible scenes they represent, as number 1 has the resurrection of Christ, while number 4 has His crucifixion.) 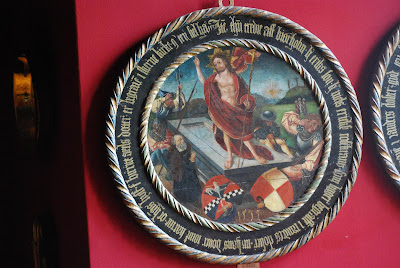 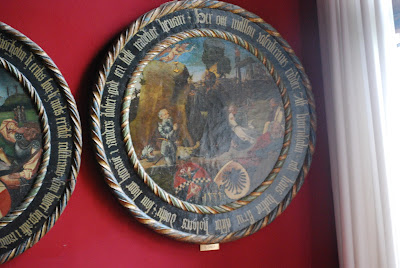 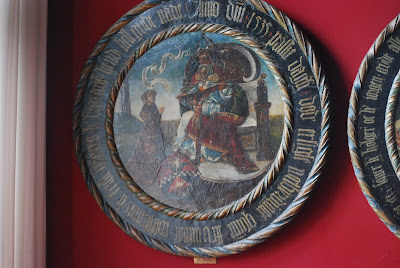 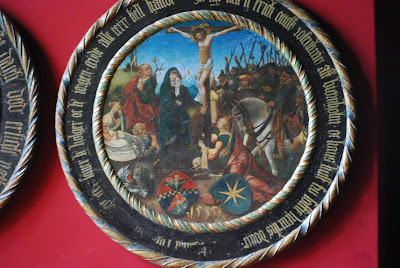 And now let's look at the heraldry displayed on them.
First is the arms of Rosenkrantz with the arms, I believe, of Tot or Thott/vonThott, generally given as Quarterly gules and or (or sometimes, Quarterly or and gules). 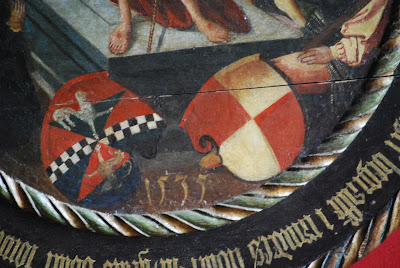 Next, we have the arms of Rosenkrantz and another shield which I have been unable to identify. It's an unusual coat of arms, appearing to be Or a headless legless eagle displayed bendwise sinister sable. 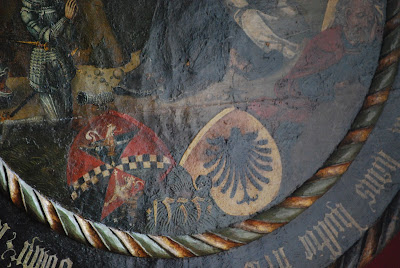 The next roundel has the arms of Rosenkrantz alone. 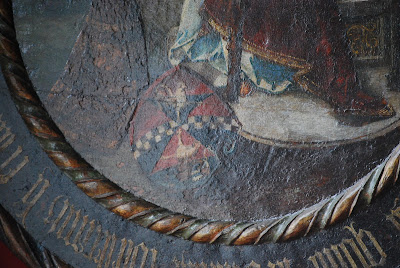 And finally, in the fourth roundel, we find the arms of both Rosenkrantz and Gyldenstjerne! (Or as Shakespeare would spell the names, Rosencrantz and Guildenstern.) 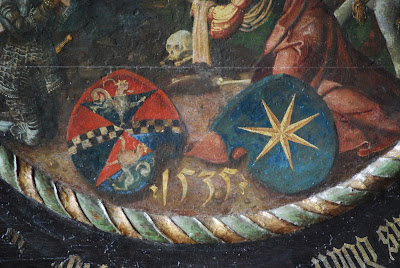 Gosh, all of these Hamlet references make me want to go off somewhere else in Denmark. What do you think? Should we take a look at Kronborg Castle in Helsingør (Shakespeare's "Elsinore", where The Tragedy of Hamlet, Prince of Denmark is set? Come back next time to see if I fall for that especial temptation!
Posted by David B. Appleton at 2:00 AM