No, I Actually _Can't_ Identify Them All


Yeah, I know, I post of lot of pictures of heraldry on this blog, and I try to identify them when I do. In spite of what appears to be a lot of success at doing so, there are actually a lot of coats of arms that I cannot, for whatever reason, identify.

Sometimes this is because the arms are simply too worn to make out clearly. Other times, it is because the arms do not appear in one or another of my sometimes limited sources. (For example, besides the Order Books for the Order of the Elephant and Order of the Dannebrog, which can be found on-line, I really have only one decent source for identifying Danish coats of arms: Sven Tito Achen's Danske adelsvåbener en heraldisk nøgle. It's a nice source to have, and I'm grateful to have a copy in my heraldic library, but, as I have discovered through using it lately, it is somewhat limited in the arms it helps me to identify.)
Anyway, I thought today that I would share a few coats of arms found on the floor of Roskilde Cathedral, only one of which I think I have identified.*

We'll start with this well-worn memorial: 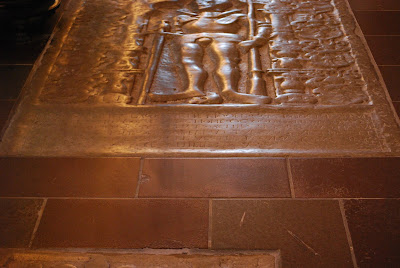 Many of the words can still be made out on the inscription, though not enough for me to identify the knight ("ridder") being memorialized. And, of course, it's easy enough to tell he was a knight, since his effigy is shown in full armor with his left arm crooked about a jousting lance and his right hand holding a sword.
Many of the shields down each side of the memorial are very worn, but one of them jumped out at me. 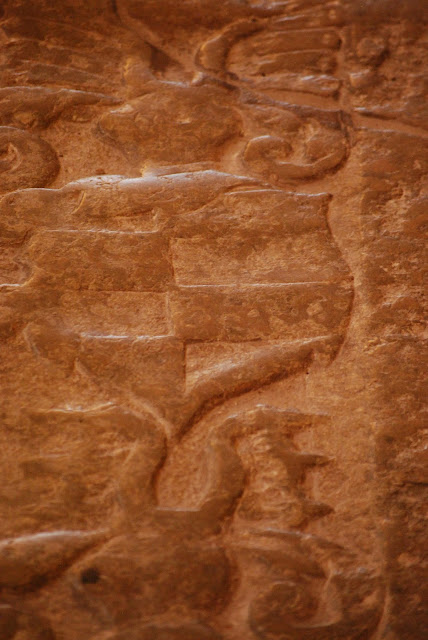 These are recognizable since we have seen them before, in our tour of Frederiksborg Castle earlier. They are the arms of Biller or Bille, Barry of four gules and argent per pale counterchanged.

For our next one, we have this very worn memorial. (Well, you know, a few centuries of people walking over them does wear the stone down a bit!) 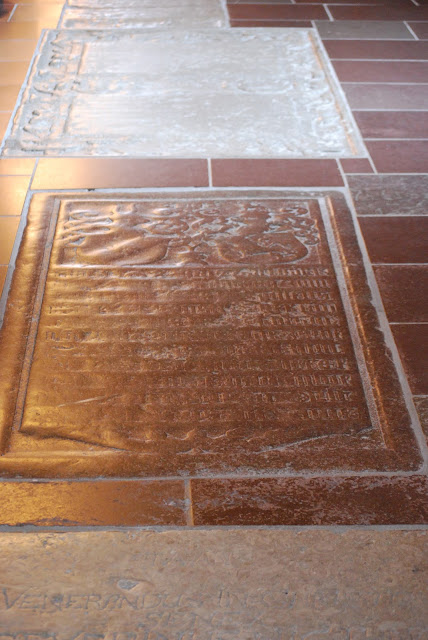 Here's a closer view of the two shields at the top, from a different angle, so the background looks more black than red. 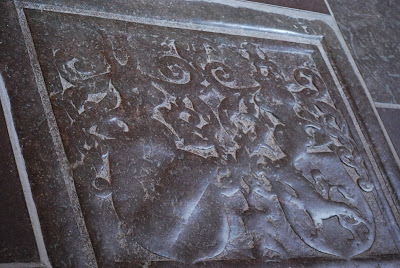 The shields are accolée, or "embracing"; that is, turned tilted inward toward each other. The shield on the left has a bend (displayed by itself, what is shown would be a bend sinister, but it is turned toward the other shield, so it's a bend dexter), and the one on the right has a lion rampant, with the tail forked (queue forchy) near its tip. Well, bends and lions rampant are pretty popular in heraldry all over Europe, so there are any number of families who could be candidates for identifying this grave marker.
But the Latin inscription on the memorial, which could give us some additional identifying information, is too worn to be deciphered, as you can see here. 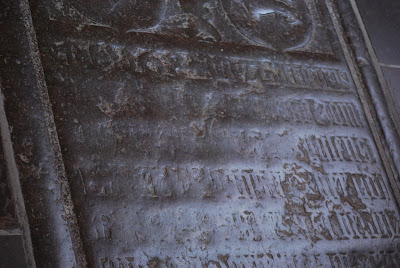 For our next memorials, we have two individuals, related either by blood or marriage, but who on their arms managed to the the sun, the moon, and the stars.
Here is the woman's slab: 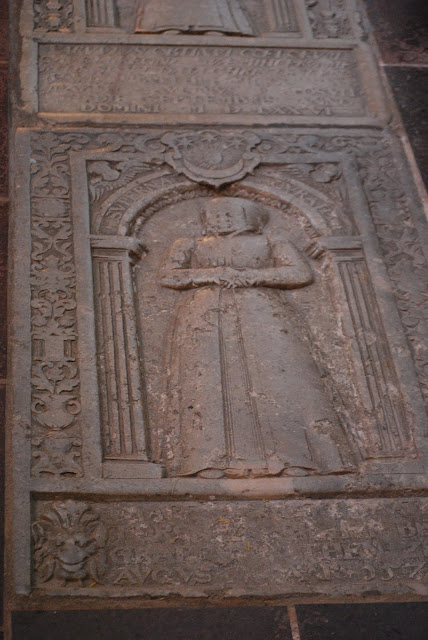 And this the coat of arms above her head: 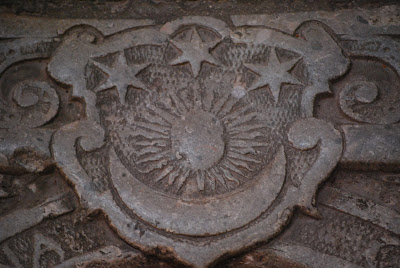 Here is the man's slab: 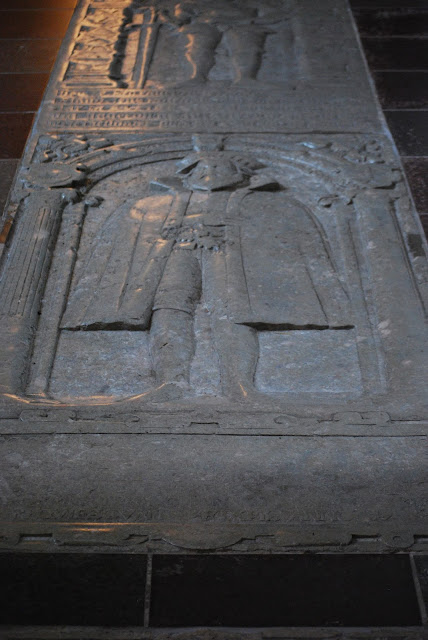 And at his shoulders, these two coats of arms: 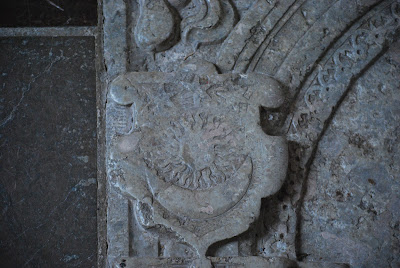 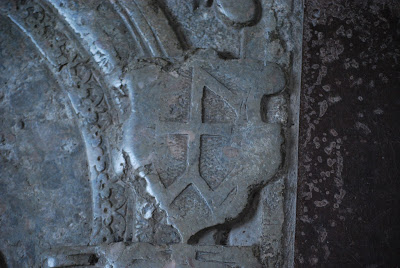 Above his right shoulder is the sun, moon, and stars coat of arms that appears on the woman's memorial, and above his left shoulder is a device like those found in Polish runic and German hausmarken heraldry.
Alas, despite the fairly unique arrangement of astronomical charges on these arms, I have been entirely unable (so far) to identify the family, much less the specific bearers, of these shields.
So there you have it! Sure, I can often link a coat of arms to a family, and sometimes even to specific members of a family. But not always. And that's sometimes just the way it is in this wonderful, colorful art that we call heraldry.

* "Why are these memorials in the floor of the cathedral?", you may ask. Though it is rare in the United States, where I live, except for a few early Colonial Period instances, in Europe it is not at all uncommon to find such memorials, where the person memorialized may be buried in the crypt underneath the church or, just as, or even more, often, directly under the floor of the church. To steal a line from American television's The Daily Show: "If you didn't know, now you know."
Posted by David B. Appleton at 2:00 AM