Roskilde Cathedral: Some Background, and Some Non-Royal Burials


I realized as I sat down to write this post, that I hadn't mentioned any background information about the Cathedral in Roskilde, Denmark.
In brief: the Roskilde Cathedral was built in the 12th-century. It has twin towers and is the first Gothic church ever built with brick. It is the oldest Gothic building in Denmark but also contains some earlier Romanesque parts. It is was built just after bricks began to be made in Denmark and contains about 3 million bricks. It is the final resting place of 38 kings and queens of Denmark.

It is also the resting place of a number of non-royals, as well, and I thought that we might start with some of them, before moving on to the heraldry of some of the kings and queens buried there. This is the armorial memorial to Danish landowner Otto Krabbe af Østergaard, til Holmegård and Eegholm (1641-1719), Secret Councilor and Chamberlain.
At the top of the monument, you can see his arms, surrounded by the collar of the Order of the Elephant, into which Order he was inducted in 1709. (You can click on the image below to go to a larger, more detailed photograph.) 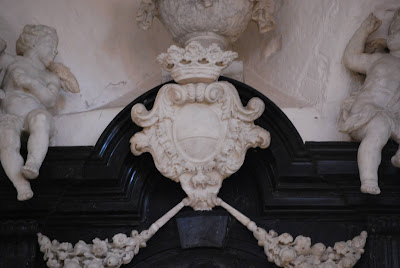 His arms are blazoned: Gules a fess argent.
Our next armorial "memorial" takes the form of a swallow-tailed banner: 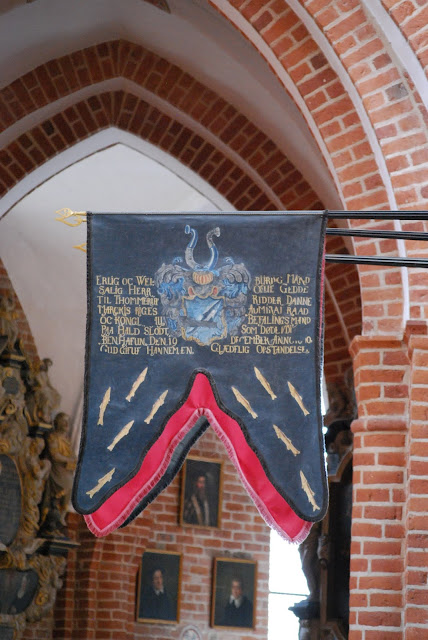 This banner memorializes Ove Gjedde (1594-1660), Admiral of the Realm (Rigsadmiral) When he died he was buried in the crypt of the Cathedral. 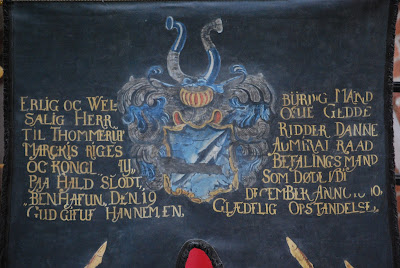 On the banner we find the canting arms of Gedde or Gjedde, Azure a pike bendwise proper. (Gedde is pike in Danish.)
Posted by David B. Appleton at 2:00 AM