And it was exactly 400 years ago (well, they probably celebrated it sometime in October, rather than in November) that the surviving (just half; about 52) members of those who sailed to New England the previous year on the Mayflower held a celebratory feast, in company with some of their Native American friends and allies, to give thanks for the recent harvest.

Now, this is not the first such thanksgiving held in then-British North America. That milestone belongs to the colony in Jamestown, Virginia, whose colonists enjoyed a Thanksgiving service after English supply ships arrived with food in the spring of 1610.
But the thanksgiving held in Plymouth Colony in the fall of 1621 has taken hold in the popular imagination as the foundation on which the modern Thanksgiving Day holiday is based.
Why do I care? Well, three of my ancestors were at that thanksgiving celebration in 1621: my 10th great grandmother Mary Chilton (who as a teenager had lost both her parents in the first hard winter); another 10th great grandmother, Constance Hopkins; and her father, my 11th great grandfather, Stephen Hopkins. (His first wife, Mary, had died in England in 1613.) So I feel a personal connection to the events of 1620 and 1621 in what is now Plymouth, Massachusetts.
"But what does this have to do with heraldry?", you may ask.
I used to make the joke that it was a shame that none of my ancestors ever took an interest in one their descendant's (me) interest, and used a coat of arms. I had to stop saying that after a visit several years ago to King's Chapel Burying Ground in Boston, Massachusetts, to visit the grave of my 10th great grandmother, Mary Chilton, and her husband, John Winslow (the younger brother of Mayflower passenger Edward Winslow). 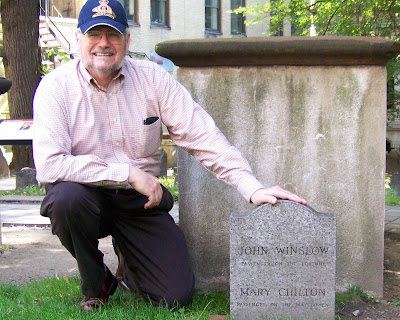 On one side of their table tomb (above) I found this heraldic plaque, displaying the Winslow arms: 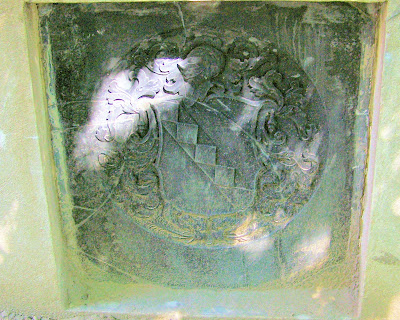 It is fairly commonly believed that several Mayflower passengers used, or at least had the right to use, coats of arms. These are, as found in Crozier's General Armory: Edward Winslow (my 10th great grandfather's older brother); Myles Standish; John Alden; William Bradford; William Brewster; and Richard Warren.
In fact, though, there is contemporary evidence for the use of heraldry by only one of those men: Edward Winslow, Assistant Governor, three times Governor, and also Plymouth Colony's agent in London. He is known to have used a seal with these arms on it.
We are also confident that his son, Josiah Winslow, the 14th Governor of Plymouth Colony, used these arms.
That being the case, there is presumably no reason why my direct ancestor John Winslow would not have had the right to bear these arms as well, whether or not he actually used them. (Certainly, the plaque on the Winslow tomb in King's Chapel Burying Ground, and a similar plaque on the Josiah Winslow tomb in Marshfield, Massachusetts, below, are likely of a later date, and not contemporary with the individuals commemorated there. They are thus secondary or even tertiary evidence for the use of these arms by those men.) 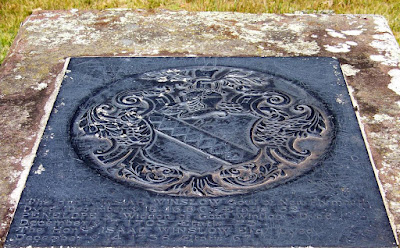 And there you have it: a personal connection to a national holiday, with an heraldic connection, as well. And isn't that a lot to be thankful for! 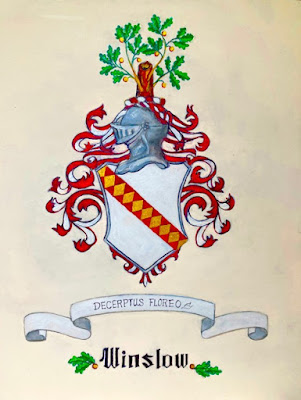 (Painting of the Winslow arms by Ruth Major)
Posted by David B. Appleton at 2:00 AM