Just in case you didn't feel inspired to combine your love of heraldry with a practical way of storing some of you seasonal belongings, here's two more armorial chests from Frederiksborg Castle in Denmark. 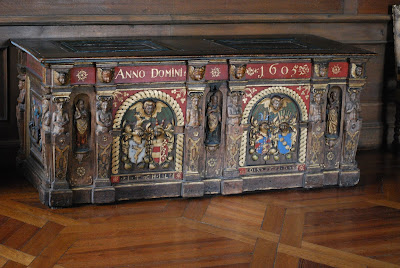 This intricately carved armorial chest has the date 1605 on its face, and in addition to all of the human figures and demi-figures (not to mention the cherub's heads), displays two pairs of shields and crests on its face. 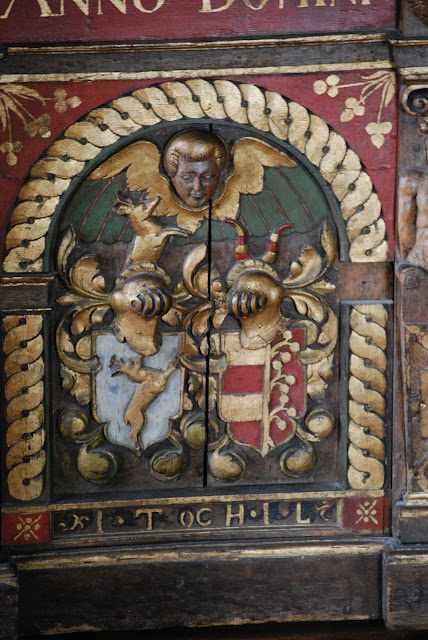 In the left-hand panel we have the arms of what may be Tinhuus (though the Tinhuus arms are generally blazoned as Gules a stag erect (sometimes crowned) argent, which coloring does not match the arms as painted on the chest. I have not (yet) been able to identify the second coat of arms in this panel. 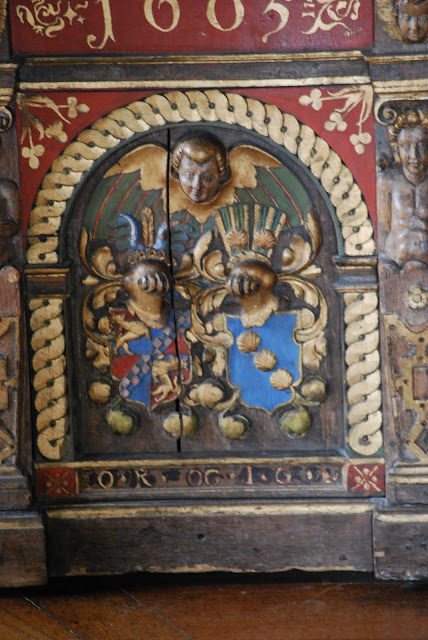 And for our final armorial chest, we have this one, dated 1653 on its face: 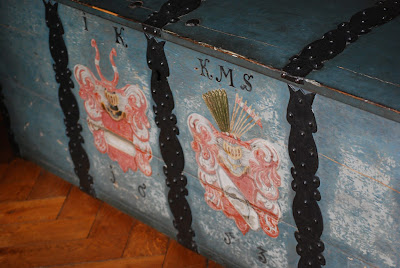 In many ways, this is the least ornate of the armorial chests to be seen in the castle.
Here we have, on the left, the arms of Krabbe, Gules a fess argent, and on the right, the canting arms of Marsvin, Gules on a bend argent a porpoise [marsvin] embowed proper). I will admit to having been thrown off track a little in translating the blazon; the most common modern translation of marsvin from Danish into English is “guinea pig”, but what's painted on the arms is pretty clearly a dolphin. After some more hunting about, I found "porpoise" as a less common translation of the word into English.
And there you have it! Five armorial chests, ranging from the fairly simple to the very ornate, all great ways to combine a love of heraldry with a practical need of places to store things.
Posted by David B. Appleton at 2:00 AM