There's at least a couple of things that you will see in most castles and large estates. One of them is something we're going to look at next time. The other is . . . large portrait paintings. And sometimes these portraits, whether half-portraits, 3/4, or full, have coats of arms painted on them to help the viewer identify the person painted there.

Today, we're going to look at some of the armorial portraits -- half, 3/4, and full -- that can be seen in Frederiksborg Castle in Denmark.

First up, and probably most important, we have the armorial portraits of King Christian I (1426-1481) and his wife, Dorothea of Brandenburg (1430/31-1495). The married in 1449. They are, of course, the ancestors of King Christian IV, who built the castle, and it may very well be (or even likely) that the portraits are not made from life. Still, there they are: the King and Queen of Denmark, with their coats of arms. 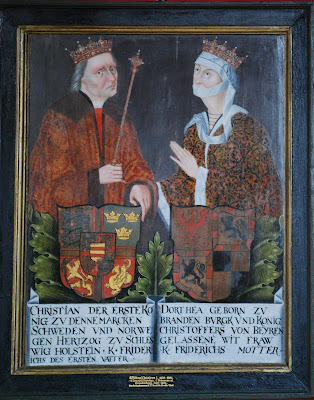 Next, we have the portrait of Dorothea of Denmark (1520-1580), the eldest daughter of Christian II. She married Frederick II, Elector Palatine, in 1535. 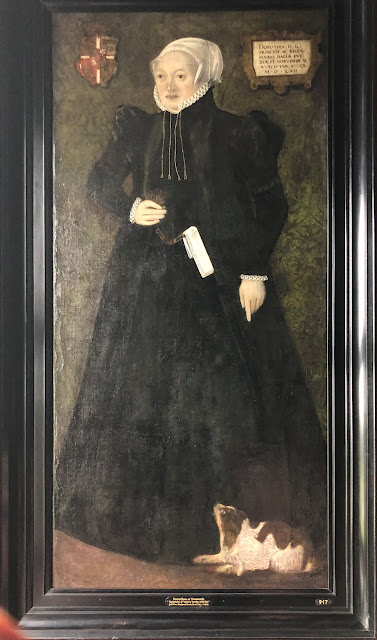 And, of course, her arms, the arms of Denmark. 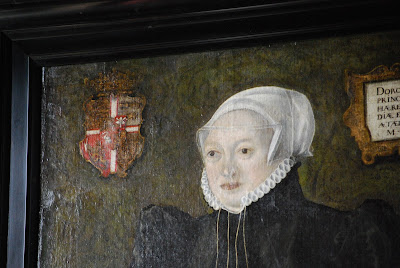 Next is the portrait of Ellen Marsvin (1572-1649), a Danish noble, landowner and county administrator. She was the mother-in-law of King Christian IV. In 1615 her only child, Kirsten, married Christian IV. Ellen had demanded that her daughter be married to rather than be mistress of the king; she also formed the marriage contract, in which it was stated that Kirsten should be the legal spouse of the king and receive a county as widow pension. Ellen was made the guardian of her daughter's children with the king, the trustee for her grandchildren’s allowances, and was made responsible for their fortune. She must have been quite the woman, to have imposed her will that way on the King, in addition to her duties as a landowner and county administrator. Just sayin'. 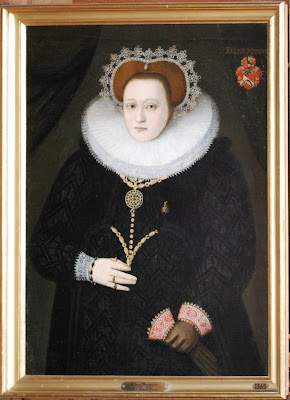 And, of course, her arms in the upper right corner of the portrait. 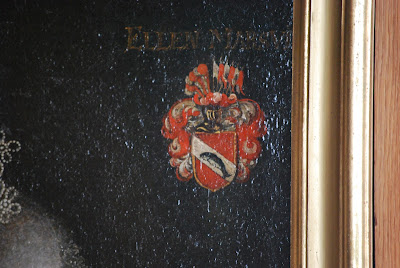 Up next is Anne Hansdatter Skovgaard (ca.1570-1645), the daughter of Hans Jørgensen Skovgaard and Anne Vernersdatter Parsberg. She married Holger Ulfstand in 1590. 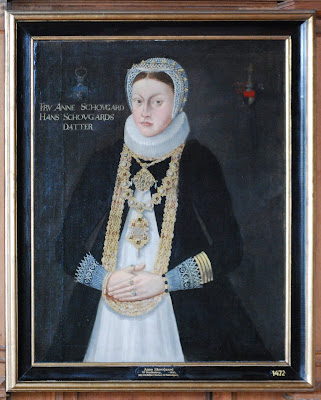 (That's quite the "necklace", isn't it?)
I am assuming that her (or at least, her father's) arms are those in the upper left of the painting. 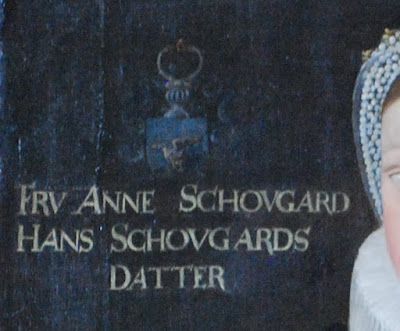 While those of her husband, Holger Ulfstand, are in the upper right. 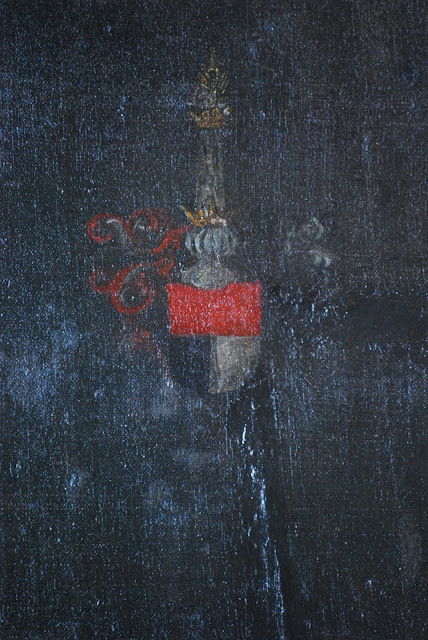 Next we come to the portrait of Henrik Gøye til Tureby (1562-1611). Turebyholm was acquired in 1604 by Gøye in exchange for other property. The fief also comprised four farms and 12 houses in the village and around a hundred copyholds scattered across a large area. Henrik Gøye was married to Margrethe Brahe (d. 1619).
Presumably those are his arms on the left. I am uncertain of the identity of the arms on the right, though they could, of course, be those of his wife Margrethe. (I apologize; the close-up of the coats of arms came out blurry, and so is not included here.) 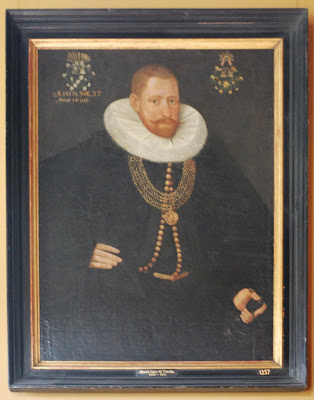 Then we come to the portrait of Sophie Clausdatter Sehested (1594-1658). She was the wife of Erik Juel, often referred to as Erik Juel of Hundsbæk and Alsted (1591-1657), a Danish courtier, seignory and Privy Councillor. 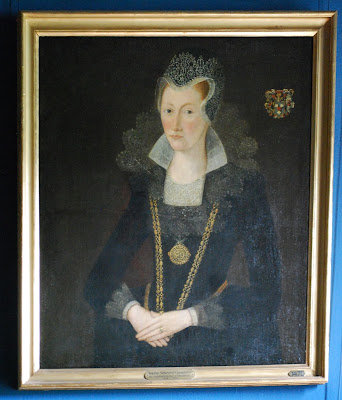 Her arms are both simple, slightly complex to the eyes of those used to British heraldic norms, and colorful at the same time. 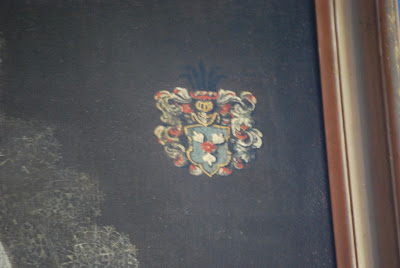 And finally, we come to the armorial portrait of Christian Jenssøn Bielke (1616-1642). He was a courtier of King Christian IV, and the son of Jens Ovesen Bjelke and Sophie Henriksdatter Brockenhuus.
And is he pulling off that red and gold outfit, or what? 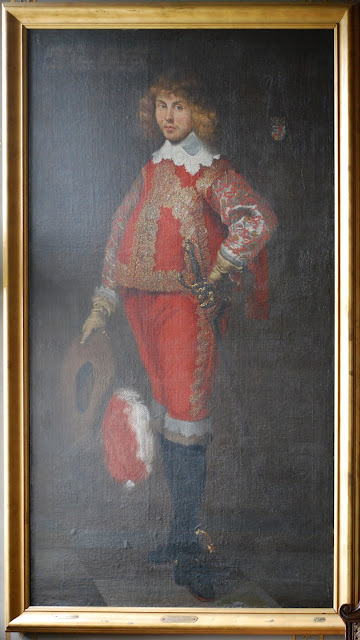 His arms, somewhat more complex than most we have seen here, are in the upper right of the painting. 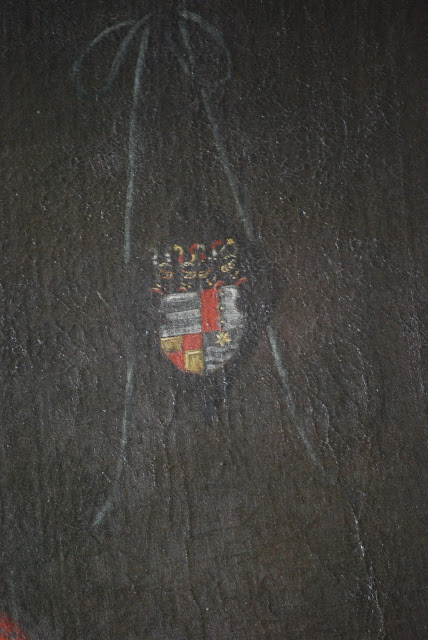 So, by now you should have a good idea of some of the armorial portraits in Frederiksborg Castle, and some inspiration for decorating your personal castle or large estate house!
Posted by David B. Appleton at 2:00 AM