A Letter Patent of Nobility, With Two Kinds of Heraldry


In one part of Frederiksborg Castle in Denmark was a case with a patent of nobility (and grant of arms?). 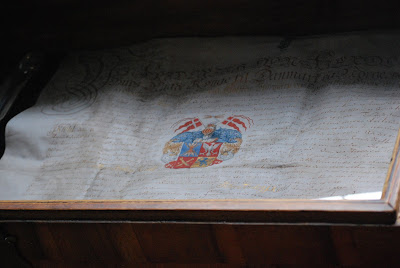 This letter patent was issued by King Frederick IV of Denmark and Norway in 1716 ennobling Peter Tordenskiold (born Peter Janssen Wessel, 1690-1720), a Vice-Admiral of the Dano-Norwegian navy, whose greatest victory came in 1717 when he destroyed the supply fleet of King Charles XII of Sweden at the Battle of Dynekilen. In the letter, he was given the surname Tordenskiold (the modern orthography is Tordenskjold), or "Thunder Shield").
You can find a lot more about his short life, career, court-martial in 1714, and death in a duel at the age of only 30 at https://en.wikipedia.org/wiki/Peter_Tordenskjold
The letter also illustrates his coat of arms: 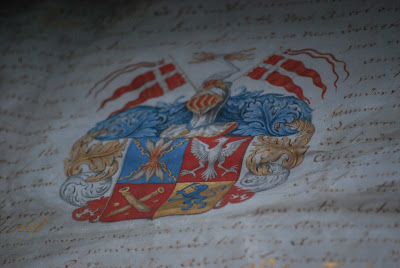 You may note several naval references in the illustration above: the crossed cannons and cannonballs in the third quarter of the arms, and the Danish naval ensigns and pennants flanking the crest.
And, as you might expect, the letter is sealed with the royal seal of King Frederick IV: 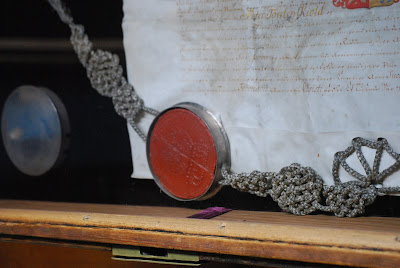 They did go in for fancy, complex knots to attach seals to documents!
But here's a close-up of the seal itself, the royal arms of Denmark surmounted by the arched crown. (I have rotated the picture so it is easier to see.) 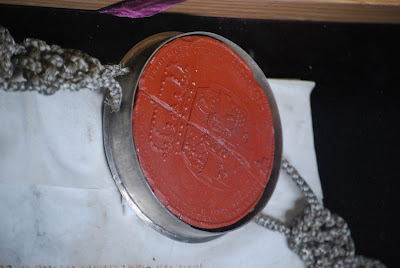 If you click on the image above to go to a larger photograph, you can clearly see the name of the king (in Latin), "Fredericus IIII".
Don't you just love looking at old documents? Especially ones with painted coats of arms and big armorial seals? I know I do! And it was great to have run across this one in Denmark.
Posted by David B. Appleton at 2:00 AM