Some Older Armorial Plaques of the Order of the Dannebrog


Beginning with this post, we're going to start looking at some of the individual armorial plaques of members of the Order of the Dannebrog in Frederiksborg Castle.

In general, I'm going to try to go from older members to more recent ones, and so we're going to begin in the 17th Century. (I will say that I don't know what was going on in 1684 in Denmark, but a lot of members were created/inducted into the Order in that year.)
For this post, and for the next one, we are still looking at members' plaques tucked away in stairwells, rather than on the floor of the Chapel.
As usual, the blazons are my own, based on both what I can make out on these armorial plaques, as well as comparing them to the emblazons in the Dannebrogordenens Våbenboger (Order of the Dannebrog Armorial Books) which can be found at the link I gave in the last post. These blazons may very well differ from any "official" blazons of these arms; where they do, any errors are my own. The same is true of any mistranslations from the names given on the plaques or in the books, which are all in Latin.

Here we have the plate of Christian Rantzow, Count of Rantzow and Lewenholm (inducted 1698). Quarterly: 1 and 4, Per pale argent and gules; 2 and 3; Sable semy of lozenges bendwise sinister a bend sinister sable; overall an inescutcheon Azure a lion rampant queue-forchy crowned or. 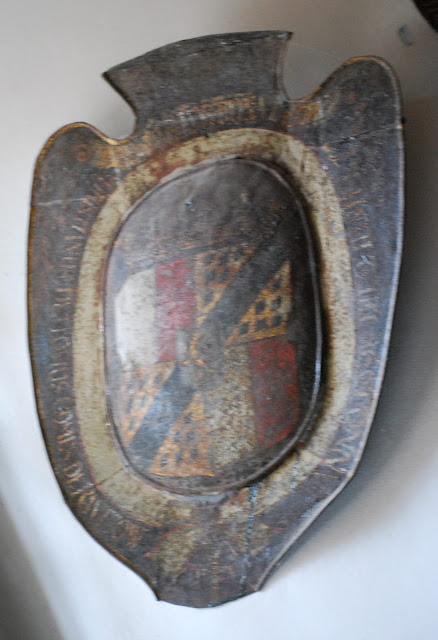 Next is that of Joachim Schach (inducted in 1684) Per fess gules and argent a fleur-de-lis counterchanged; and Caius Rumohr (also inducted 1684) Per pale, Argent two bars gules, and Azure a wing issuant from the line of division argent. 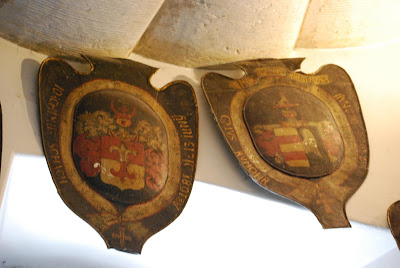 Here we have the plaque of Philip Adams of Massenbach (inducted 1684). Or two bars azure; and Caius Lawrence, Count of Bruchdorf (inducted 1671) Per fess gules and azure in chief two lions passant respectant or and in base two winged fish bendwise sinister and bendwise respectant argent. 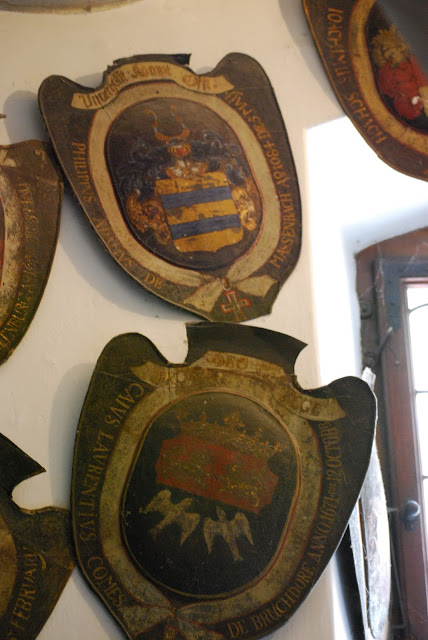 John George, Baron of Schulenberg (inducted 1684) Quarterly: 1 and 4, Argent three bird’s legs fesswise embowed gules; 2 and 3, Or a bull passant quarterly gules and argent, its head quarterly gules and argent crowned or; overall an inescutcheon Argent an eagle displayed gules; and John Echard of Geise (inducted 1681) Per pale: Per pale a lion rampant gules; Azure a decrescent moon within its horns argent a mullet of eight points or. 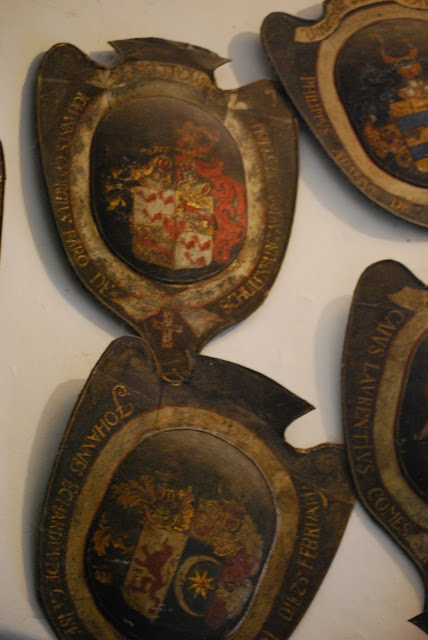 And finally, we have the plaques of: Joachim Henry von Bülow (inducted 1684) Azure semy of bezants, or Azure fourteen bezants four four three two and one; Francis Eberhard of Spekran (inducted 1684) Quarterly: 1 and 4, Gules a tower argent; 2 and 3, Argent a barred helm bendwise sinister silver garnished or with a panache of ostrich feathers alternately gules and argent; overall an inescutcheon Azure a bird [cock?] passant to sinister argent. 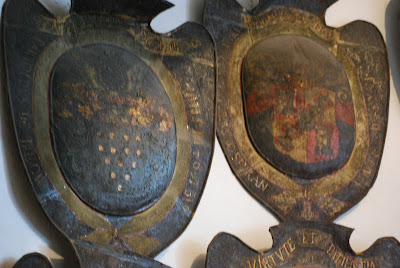 That should be enough to look at for this time. As always, you can click on a picture to go to a larger, more detailed one of each of the plaques.
"Why are they all so dark?", I hear you ask. You have to remember that electric lights are a comparatively recent invention. In the 17th Century, and for quite some time after, much lighting and heating was done with sooty fireplaces, smoky candles, smudge-producing whale oil and kerosene lamps, which tended to build up and darken whatever these smoky particles landed on over the years.
To quote Trevor Noah, "If you didn't know, now you know."
Posted by David B. Appleton at 2:00 AM