And Now For Something Completely Different


My wife was at an event hosted by the Dallas Area Fiber Artists recently, where they were having a "Stash Swap". Basically, this is where everyone brings fiber-related stuff they don't really want anymore, and everyone else can go through it to see if there's something that they want to add to their stash at home.

I don't often accompany her to these events, and in any case, I was giving a presentation via Zoom during the time it was going to be held.
However, my wife is always looking out for me! (I reciprocate, mind you. If I see something with skulls on it, especially Mexican Day of the Dead sugar skulls, I make sure to point them out for her so she can decide whether it's something that she wants to add to her collection.)
Anyway, she was looking through various piles of no-longer-loved stuff, and ran across this shield, which she grabbed and brought home for me. 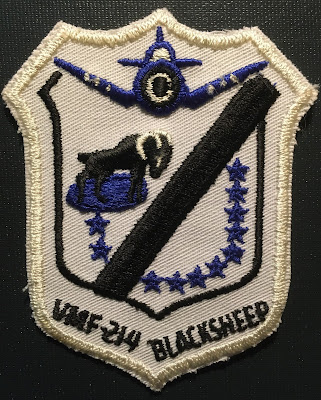 This is, of course, the unit insignia of the U.S. Marine Fighter Squadron 214, the "Blacksheep Squadron".
VMF-214 may be more familiar to you from the old television program Black Sheep Squadron which aired from 1976-1978. That series was, as IMDb informs us, "The dramatized World War II adventures of U.S. Major Gregory 'Pappy' Boyington and his U.S. Marine Attack Squadron 214, (The Black Sheep Squadron)."
Though the TV series was mostly fiction, the VMF-214 was quite real. It was commissioned on July 1, 1942 on Oahu, Hawaii. On the evening of September 13, 1943, the men of VMF-214 gathered in Major Boyington's hootch during which time it was suggested that they needed a nickname. Originally the squadron called itself "Boyington's Bastards" after its new commander, the fact that all of the pilots had been "orphans" and not attached to a squadron when they got together, and the fact they possessed few reliable planes and no mechanics. The following day, this new label was presented to the Marine Corps public information officer on the island at the time, Captain Jack DeChant, and found to be unacceptable because civilian newspapers would never print it. DeChant then suggested the call sign "Black Sheep" because the expression meant essentially the same thing.

They chose for their badge the mark of illegitimacy, the bar sinister* (a nod to their first nickname, "Boyington's Bastards"), a black sheep superimposed, surrounded by a circle of twelve stars, and crowned with the image of their aircraft, the gull-winged F4U Corsair.
Now known as VMA-214, the Blacksheep Marine Attack Squadron still exists, currently flying AV-8B Harriers. (They will be switching over to F-35Bs over the next two years.) And they still use their insignia, above, with an A replacing the F in VMF.
Ah, the things you can run across at a fiber artists' Stash Swap!
* Yes, as a herald I know that (1) there is no such thing as a "bar sinister" and, (2) a bend sinister is not really a mark of bastardy. But I'm not going to go "tell it to the Marines".  (https://en.wikipedia.org/wiki/Tell_it_to_the_Marines) That way lies madness.
Posted by David B. Appleton at 2:00 AM