Remembering An Event in Stained Glass


This next armorial stained glass window in the Cathedral of Our Lady in Antwerp commemorates the consecration in 1873 of the Statue of Our Lady of Lourdes by Mgr. Deschamps. (The window itself is dated 1885.)
This window was a donation of Johanna Catharina Waegemans, who was complying with the last will of her deceased husband, Cornelius Joseph Waegemans.
The devotion for Our Lady of Lourdes boomed quickly in the second half of the 19th century. In many churches her statue was put up, and sometimes, as was the case here in the cathedral, only temporarily for the specific feast on February 11, 1873. 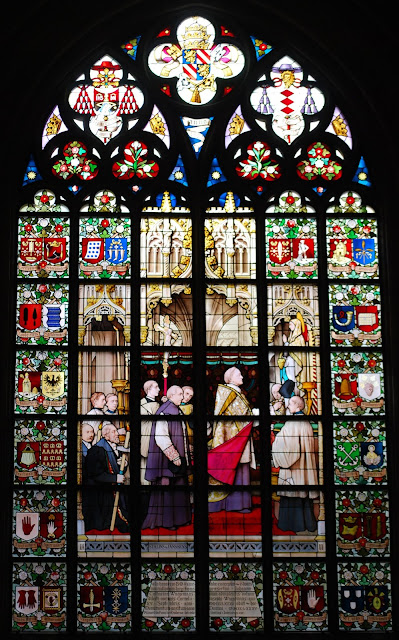 Behind Msgr. Victor-August Deschamps, archbishop of Malines, is parish priest and dean Petrus Sacré. Churchwardens Jan Ullens and Jacobus Fuchs were elected to be portrayed, probably because they both had served the church board for more than 20 years and so were those with the longest record.

There are three coats of arms at the top of the window: 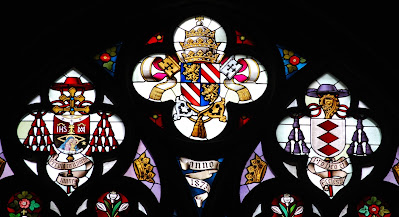 In the center is the coat of arms of Pope Pius IX (1846-1878) (Giovanni Mastai-Ferretti), Quarterly: 1 and 4, Azure a lion rampant crowned or its hind foot resting on a globe [also or, sometimes – as here – argent]; 2 and 3, Argent two bendlets gules.

To the left are the arms of Msgr. Victor-August Deschamps, archbishop of Malines, which I am not even going to attempt to blazon because it has so very much going on on the shield there, and which was adapted to his elevation to the College of Cardinals in 1875.

And to the right are the arms of Msgr. Petrus Sacré, Argent three fusils fesswise in pale gules. He was Pastoor-deken (pastor-dean) of Onze-Lieve-Vrouw (Antwerp, 1868). (A dean is an authority within several Christian denominations, usually a clergyman, who directs a specific territory within a diocese; the holders of diocesan deans. These are priests who - on behalf of the bishop - coordinate a specific part of the diocese.)

Encircling the central scene of the window are a series of shields containing the arms of the city's crafts and guilds: e.g., Shoemakers, Coffermakers, Schoolmasters, Vintners, Papermakers, Glaziers (windowmakers), and more. See how many you can identify. To see them more clearly, click on one of the images here to see a larger version. (As a hint: The name of the guild is on a scroll beneath each coat of arms, though yes, it is in Dutch.) 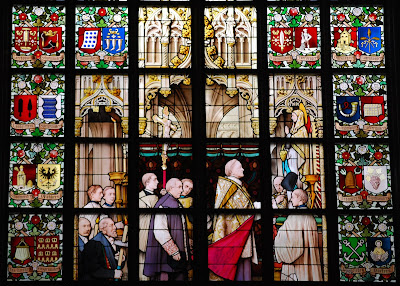 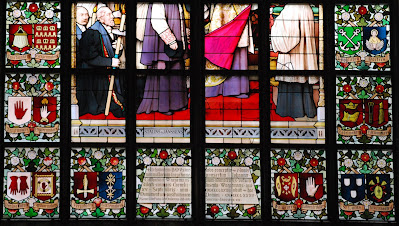