Memorializing Not an Individual, But an Event


The next armorial window we're going to look at is less about commemorating the donors (and their coats of arms) than it is an event: in this case, the proclamation of the dogma of Mary’s Immaculate Conception in 1854. (The window, by Edouard Didron, is dated 1873.)
Initially this was put next to the altar, but partly because it differs in style from the other stained-glass windows and partly because of the royal donation of the first stained-glass window in 1878, it was moved to a more modest spot at the far end of the aisle. 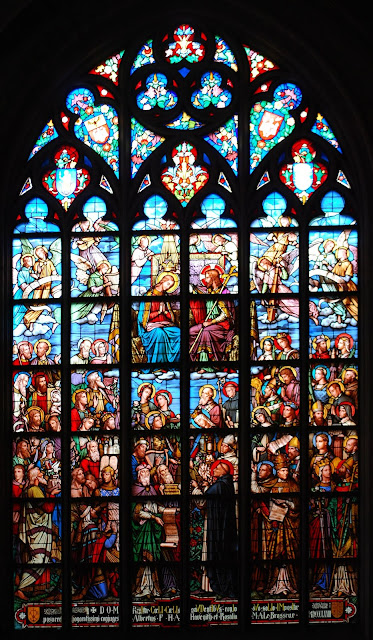 The central motif of the window, surrounded by angels, is Mary, Immaculately Conceived, at Christ’s right-hand side. Some fifty characters – Biblical figures and saints – share her joy in heaven. Among them is also Pope Pius IX, who proclaimed the dogma, but he directs himself to the patron saints of the two donors in the lower right portion of the window.
At the top of the window are four coats of arms; three of which are identifiable. They are, from left to right: the Chapter of the Cathedral of Our Lady; the Margraviate of Antwerp; and the City of Antwerp.
The fourth coat is unidentifiable in any picture of it I have seen: my own, on Pinterest, in the Wikipedia article on the Cathedral, anywhere. The sun coming in the window apparently washes and "fuzzes" out the figure on the shield.
The donation of this window was by the married couple Albertus Havenith and Rosalia Le Brasseur. His "arms" (basically a merchant's mark placed on ashied) are at the bottom left of the window, and the marshaled arms of Albertus and his wife Rosalia Le Brasseur are at the bottom right. 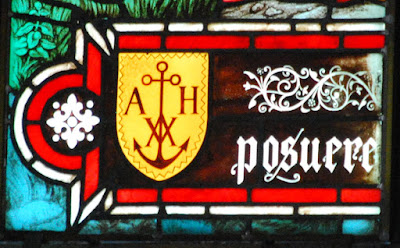 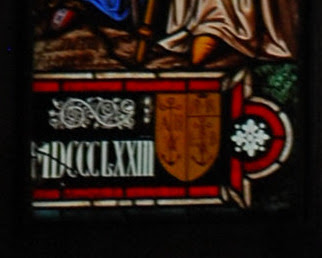 I apologize for the lack of clarity of the marshaled arms. I normally try to take two photographs of each item, because frequently one turns out to be out of focus. Alas, I did not follow this procedure in this case, and the picture I took of the couples marshaled arms was indeed out of focus. The image above is extracted from the picture of the full window, but obviously suffers from being enlarged. Sorry!
Posted by David B. Appleton at 2:00 AM