Nobody Expects the ... Austrian Archdukes?

(My apologies to anyone who doesn't quite understand the title of this post; it's a take-off of a line from an old Monty Python skit, where the main line is: "Nobody expects the Spanish Inquisition!")
The next armorial stained glass window in the Cathedral of Our Lady, Anterwerp, that we're going to look at contains some more "foreign" heraldry that I hadn't expected to see.
I mean, really, when you look at the history and the individuals being commemorated, it makes perfect sense, but I'm just an amateur herald from Texas, so what do I know? I have to look these things up to more fully understand what I'm looking at.
Anyway, the window is entitled the Archdukes Albert and Isabella in Adoration of the Cross by Cornelis Cussers and Jan Baptist van der Veken, and is dated 1616. 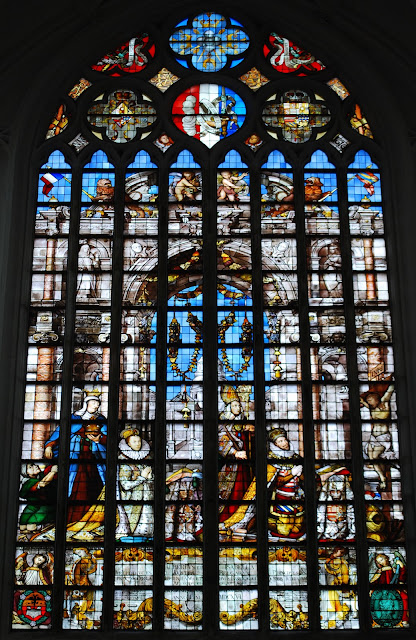 As you can see, there is clearly a lot going on in this window. At the very peak of the window, we have symbols of the Order of the Golden Fleece: firesteels, sparks, and a golden fleece. 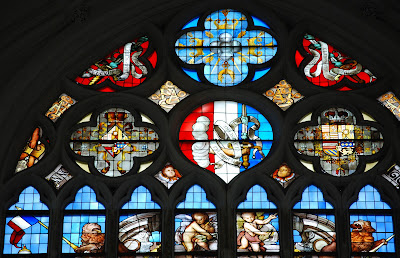 Below that, on the right we see the arms of Albert VII as Sovereign of the Habsburg Netherlands, and on the left those of Isabella Clara Eugenia as Sovereign of the Habsburg Netherlands.
Their full title was: Albert and Isabella Clara Eugenia, Infanta of Spain, by the grace of God Archdukes of Austria, Dukes of Burgundy, Lothier, Brabant, Limburg, Luxembourg and Guelders, Counts of Habsburg, Flanders, Artois, Burgundy, Tyrol, Palatines in Hainaut, Holland, Zeeland, Namur and Zutphen, Margraves of the Holy Roman Empire, Lord and Lady of Frisia, Salins, Mechlin, the City, Towns and Lands of Utrecht, Overijssel and Groningen.
Near the bottom of the window we find the Archdukes Isabella (on the left) and Albert (on the right), each with their coat of arms in front of them, hers on a lozenge, and his on a standard heraldic heater shield. (Again, you may click on any of the images here to see a larger version,and with this much detail, I recommend doing so.) 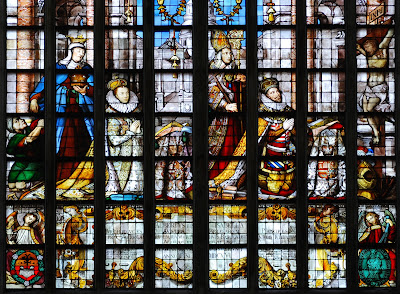 Further (heraldically speaking), Archduke Albert is wearing a tabard of his arms under his cloak.
Isabella is accompanied here by her patron saint Elizabeth of Thuringen, bearing a crown, and Albert is accompanied by his patron saint Albert the Great holding a mitre.
In the very lower left-hand corner is the arms of the Margraviate of Antwerp, which we have seen before here and there in the city of Antwerp. In the very lower right corner is the seal of the Chapter of the Cathedral of Our Lady.
Posted by David B. Appleton at 2:00 AM