An English Window in Antwerp Cathedral

Following the unexpected Spanish window in our last post, we come to an unexpectedly English window. (As always, you may click on an image to see a larger, and more detailed version, something that I recommend just to you can take in all of the details contained in this window.) 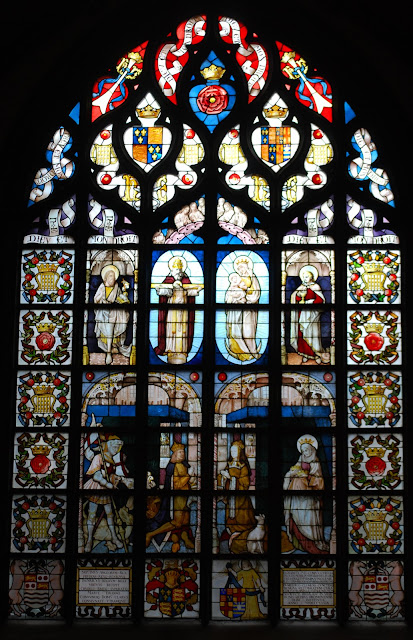 You can tell at first glance, even without reading the memorial text at the bottom, that the central figures being memorialized are English. 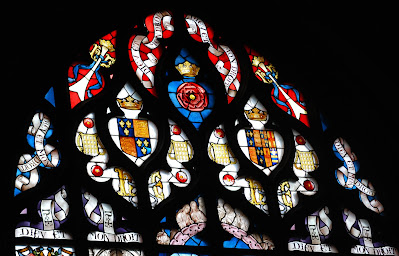 At the top of the window we find the arms of King of England (on the left) and the arms of the Queen of England (on the right), with a crowned red rose between them. Around them are portcullises, red roses, and scrollwork with the motto of the King, Dieu et mon droit (God and my will) and the initials "H" and "E".
These are, of course, the arms of King Henry VII, and the marshaled arms of him and his Queen, Elizabeth of York. 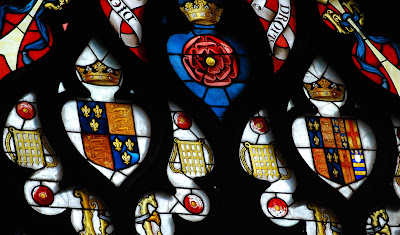 Moving down to the top row of figures, we notice that the sides of the window are also marked by crowned portcullises (within wreaths of roses) and crowned roses. 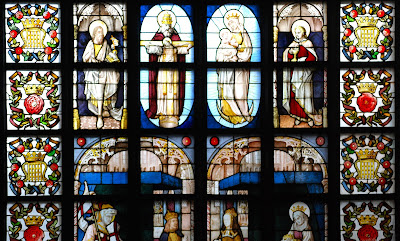 The figures in this row are, from left to right: St. John the Baptist; Pope Innocent VIII; the Blessed Virgin; and St. John the Evangelist. 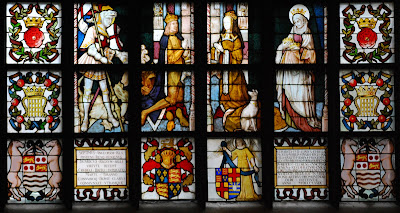 The figures in the bottom row are, also from left to right: St. George; King Henry VII; Queen Elizabeth of York; and Queen Elizabeth Woodville, wife of King Edward IV and mother of Elizabeth of York.
In the bottommost row of this window are two identical coats of arms we will discuss in more detail in our next post; two memorial inscriptions to King Henry and Queen Elizabeth; and in the center, an achievement of the Royal arms (Quarterly France modern and England) and the arms of Elizabeth of York being held by an angel (Quarterly: 1, Quarterly France modern and England; 2 and 3, Or a cross gules (de Burgh/Ulster); and 4, Barry of six or and azure on a chief or two pallets between two base esquierres [gyrons] azure overall an inescutcheon argent (Mortimer)). This shield is a modified and simplified version of the the quartered arms born by her paternal grandfather, Richard, the 3rd Duke of York. (Her father, of course, came to bear the Royal arms as King.)
The date given in the memorial to Elizabeth, 1789, is the date the window was repaired and reinstalled. There is a transcription of a letter dated 1775 that describes the window and its then-broken condition. (Literary Anecdotes of the Eighteenth Century, Comprising Biographical memoirs of William Bowyer, Printer, F.S.A. and Many of his Learned Friends by John A Nichols, F.S.A., Nichols, Son, and Bentley, London, 1815, Vol. IX,  pp. 356-357)
Finally, of course, we come to the question why there is an armorial stained glass window to an English King and Queen in an Antwerp cathedral. The answer, I feel confident, lies in the following:
Henry VII's most successful diplomatic achievement* as regards the economy was the Magnus Intercursus ("great agreement") of 1496. In 1494, Henry embargoed trade (mainly in wool) with the Netherlands in retaliation for Margaret of Burgundy's (his Queen Elizabeth of York’s aunt, who married Charles the Bold of Burgundy) support for the pretender to the English throne Perkin Warbeck. The Merchant Adventurers, the company which enjoyed the monopoly of the Flemish wool trade, relocated from Antwerp to Calais. At the same time, Flemish merchants were ejected from England. The stand-off eventually paid off for Henry. Both parties realized they were mutually disadvantaged by the reduction in commerce. Its restoration by the Magnus Intercursus was very much to England's benefit in removing taxation for English merchants and significantly increasing England's wealth. In turn, Antwerp became an extremely important trade entrepôt (transshipment port), through which, for example, goods from the Baltic, spices from the east and Italian silks were exchanged for English cloth.
* His most successful non-diplomatic achievement was, of course, successfully wresting the throne of England from King Richard III.
So there you have it! A large, detailed, exquisitely done armorial stained glass window in Belgium with the arms of the English King and Queen who reigned in the aftermath of the Wars of the Roses on the other side of the English Channel. A surprise to find, but less surprising once the history of the relationship between the English Crown and mercantile Antwerp is known.
Posted by David B. Appleton at 2:00 AM