A Window with Two Armorial Saints

We have looked at a number of armorial stained glass windows in the Cathedral of Our Lady in Antwerp, Belgium, in the last few weeks.
If you will recall from those posts (or, of course, if you'd prefer you can always scroll down the page see some of them), there have been several saints depicted in these windows; some name saints, some personal patron saints, and some - as in our last post - what we might term national patron saints.
The window we are going to look at today is not as exuberant as most of the windows we've looked at to day, and the only coats of arms in it are those of the saints depicted there.

The memorial text in the center, below the central figure of the Mater Dei (Mary, the Mother of God), remembers: Ioannis Francisci Raas, who died in 1849, his wife, Ioannæ Mariæ Peeters, who died in 1880, and their son, Ferdinandus Artorius Josephus, who died in 1890.
The figures depicted are thus the patron saints of the individuals being memorialized: St. Francis, Mary, and St. Ferdinand.
Of Saints Ferdinand and Francis (left and right), their coats of arms are below them at the bottom of the window. 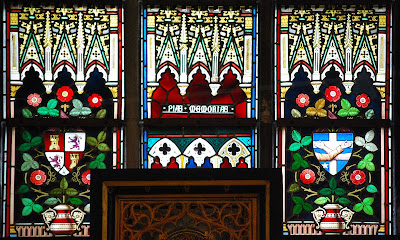 St. Ferdinand's arms are the quarterly arms of Castile and Leon, here with Granada in base.
St. Francis of Assisi's arms are a Latin cross throughout on a blue field with two crossed arms: Christ's right hand with the nail wound and Francis' left hand with the stigmata wound, with a mullet argent in dexter base.
Each coat of arms is surrounded by a rose bush growing from a vase or pot, and I suspect the roses are a play (in heraldic terms, a "cant") on the surname Raas, adding another element to the rendition.
All in all, a lovely armorial window.
Posted by David B. Appleton at 2:00 AM