A Companion for the English Window

Two 1503 stained glass windows in the Cathedral of Our Lady, in Antwerp, Belgium, commemorate the Intercursus Magnus, the important commercial treaty that the Burgundian and English sovereigns concluded in 1496.
In our last two posts, we looked at the "English" window. This time we're going to look at the window commemorating the "other" side of that treaty, in the "Burgundian" window. 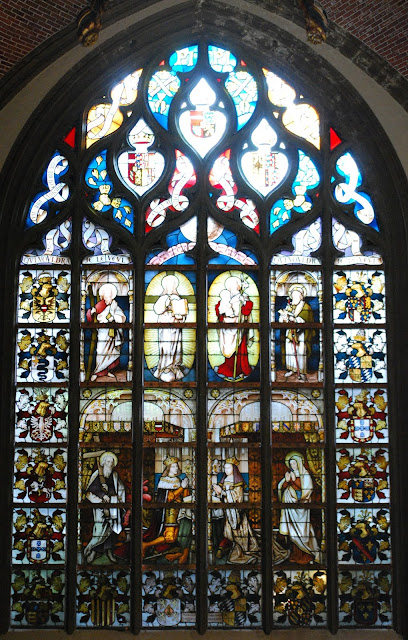 The central figures here, in the lower row, are the kneeling images of husband and wife, Philip the Handsome, Duke of Burgundy, and Joanna I (‘the Mad’), Queen of of Castile and Leon. Standing behind them are their personal patron saints. They are shown beneath canopies whose borders are emblazoned with the coats of arms of their territories. 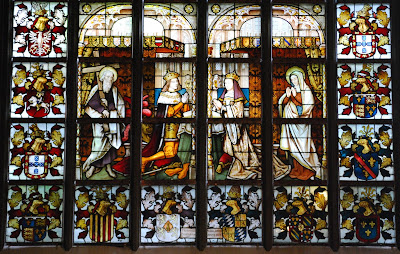 Above them, in the upper row of figures, the two central figures are Christ as Salvator Mundi and St. Joseph. Flanking those figures are the patron saints of Philip's and Joanna's national patron saints: St. Andrew (carrying his saltire cross) for Burgundy, and St. James (Santiago) (carrying a palmer's staff from which is hung an escallop) for Spain.

At the top, flanking the central coat of the arms of Burgundy, are symbols of the Order of the Golden Fleece: in this instance, three firesteels and a golden fleece. To the left are the marital arms of Philip and Juana, Burgundy impaling Spain. On the right are the Holy Roman Empire (Philip's father was the Emperor Maximilian) impaling another version of Burgundy. Only a little further down on each side we find three steels surrounding a flint and giving off sparks/small flames. And, of course, at the very peak of the window are Philip's and Joanna's initials, P and I. 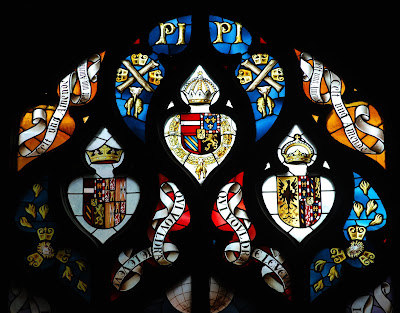 Flanking the window on both sides and running across the bottom are coats of arms of various regions and individuals with a connection to the events commemorated here: Burgundy, Portugal, the Prince of Wales (at this date, not Arthur but Henry, later King Henry VIII, who in 1509 married Juana's older sister and widow of his own older brother, Catherine of Aragon), Aragon, Bavaria, the Duke of Bourbon, the Duke of Anjou, and others.
All in all, a gorgeous display of heraldry, and a worthy match to the English window nearby.
Posted by David B. Appleton at 2:00 AM