A Royal Window in the Cathedral of Our Lady, Antwerp

I have to admit, I have somewhat mixed feelings about this next window. On the one hand, it's wildly heraldic, with the coats of arms and territorial arms of its donors, and so is worth sharing. On the other hand, its donors were King Leopold II and his Queen, Marie Henriette of Austria, and King Leopold is under a bit of a cloud for the abuses under his regime in what was then the Belgian Congo in Africa. On the other hand (on the third hand?), neither his nor his wife's figures appear in the window, which may be enough to keep it from being vandalized by our modern iconoclasts. On the other hand (fourth hand?), it has his and her names prominently displayed right there.
So, as I said, mixed feelings.
The window, which is dated 1878, has as its central figures Our Lady, the patron saint of Antwerp, and her husband Joseph, the patron saint of Belgium. The window is a donation of King Leopold II and Queen Marie Henriette, hence its being called "the Royal Window." 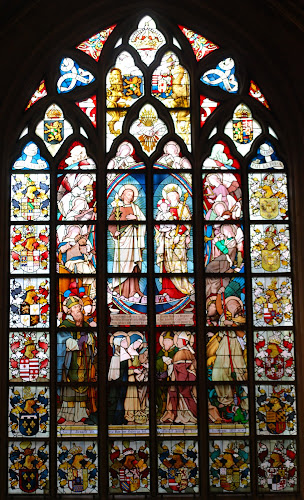 Each of the then nine Belgian provinces are represented by their patron saints.
The inscription in the center reads (in Latin) as I make it out:

Thus the donors are Leopold II (Leopold Lodewijk Filips Maria Victor) (1835-1909) and Marie Henriette of Austria (1836-1902). Leopold was the eldest surviving son of Leopold I and Louise of Orléans, he succeeded his father to the Belgian throne in 1865 and reigned for 44 years until his death – the longest reign of any Belgian monarch.
Leopold II remains a controversial figure both in Belgium and in Africa, especially in what now the Democratic Republic of Congo, because of what many term genocide owing to the extensive abuses under his regime in what was then the Belgian Congo (estimates of the dead range from 1 million to 15 million, with a “best guess” based on the spotty records available at about 10 million).
In the mid-1880s, with the help of the explorer Henry Morton Stanley, Leopold seized a part of central Africa, more than 76 times the size of Belgium, in a region that includes the modern Democratic Republic of Congo. Until 1908, Leopold ran the Congo as a venture for personal profit. Using a private army that included Congolese orphans, the king and his agents drained the land of resources, killing elephants for ivory and tapping trees for rubber. Congolese families were forcibly moved and their members separated and enslaved.
On Tuesday, June 9, 2020, a 150-year-old statue of King Leopold II of Belgium, whose forces seized Congo in the late 19th century and ran an exploitative regime that led to the deaths of millions, was removed from a public square in Antwerp as protests against racism continued around the world.
At the peak of the window is an imperial crown, and immediately below it representations of his arms (left and center left, the latter supported by a lion rampant) and hers (center right, supported by a griffin) and right, marshaled with her husband's. 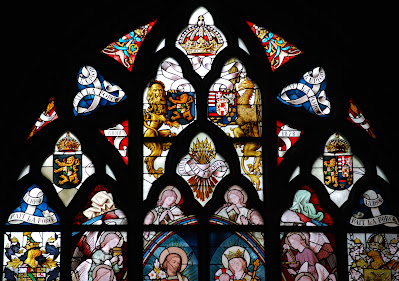 Descending down the window, flanking the central and surrounding figures, are a number of territorial (perhaps ancestral?) coats of arms, many of which you may recognize. Here, too, until we get to the bottommost central arms, his are on the left and her are on the right. 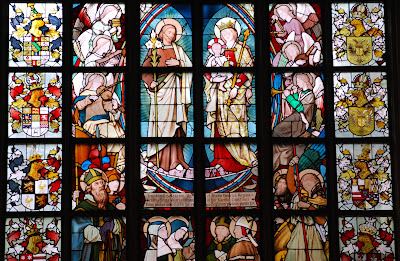 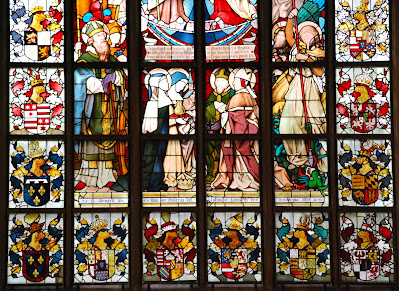 In the right-hand column of arms, you may recognize the next to bottommost; it is the arms we have seen a number of times in some of my recent posts from Stuttgart and Heidelberg, the arms of the Duchy of Württemberg! It's almost like running across an old friend here.
Anyway, there you have it. A beautiful armorial stained glass window donated to the Cathedral by a couple with a somewhat stained history.
As I said: mixed feelings.
Posted by David B. Appleton at 2:00 AM