I've grouped these next three armorial memorials together because, while they have heraldry of a sort on them, none of them bear the personal arms of the person memorialized.

First, we have the memorial to Maj. Gen. Henry J. Degacher: 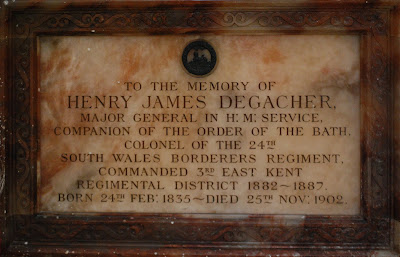 The heraldic portion of the memorial plaque consists of the badge of the 24 Regiment of Foot South Wales Borderers: 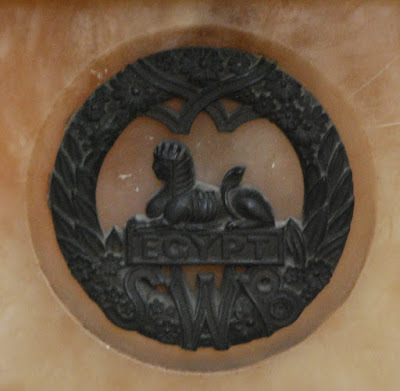 The Regiment has had a long and distinguished existence, much of which is outlined in its Wikipedia page at https://en.wikipedia.org/wiki/South_Wales_Borderers. Early in its history, it was deployed to Egypt in the aftermath of the Battle of Abukir in March 1801. During the Anglo-Zulu War, it also took part in the battles of Isandlwana (dramatized in the 1979 movie Zulu Dawn) and Rorke's Drift (immortalized in the 1964 movie Zulu).

The Regimental Badge bears the figure of an Egyptian sphinx couchant atop a rectangle with the word "Egypt" all within a laurel wreath bearing the letters "SWB".

The next memorial is to a number of the officers (both commissioned and non-commissioned) and unnamed men of the "Rank and File" of the 3rd East Kent Regiment ("The Buffs"). 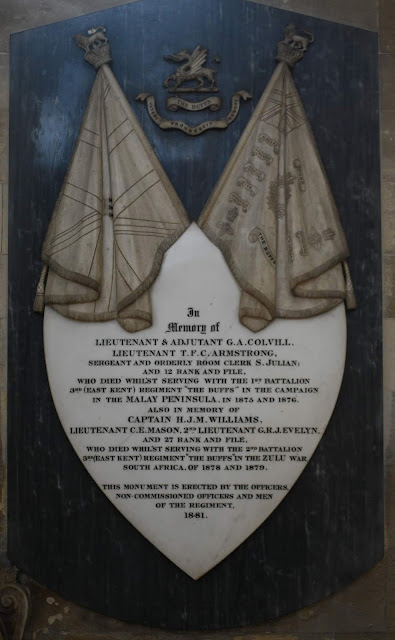 This monument is erected by the officers,
non-commissioned officers and men
of the Regiment,
1881.

More information about the Regiment can be found in its Wikipedia article at https://en.wikipedia.org/wiki/Buffs_(Royal_East_Kent_Regiment) 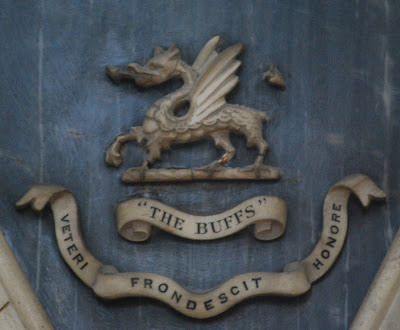 The badge of The Buffs is a crest, Atop a torse a dragon passant. Beneath the dragon is a scroll with the words "The Buffs"; beneath that scroll is another with the motto of the Regiment, Veteri frondescit honore (Its ancient honor flourishes).

Our final memorial is to Lt. Col. R.C. Cokayne-Frith, Major of the 15th "The King's" Hussars. 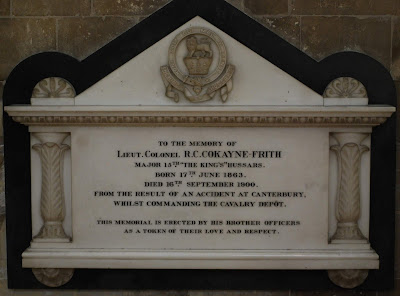 To the Memory of
Lieut. Colonel R.C. Cokayne-Frith
Major 15th “The King’s” Hussars.
Born 17th June 1863.
Died 16th September 1900.
From the result of an accident at Canterbury,
Whilst commanding the Cavalry Depot.

This memorial is erected by his brother officers
as a token of their love and respect.

Once again, more information about this Regiment can be found at Wikipedia at https://en.wikipedia.org/wiki/15th_The_King%27s_Hussars 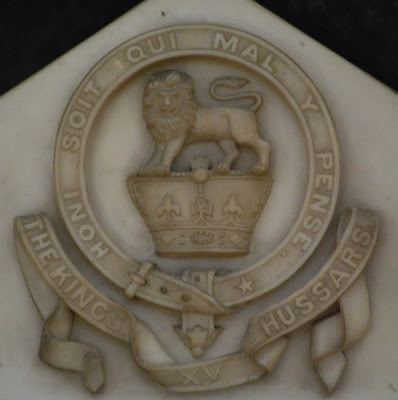 The badge of the 15th "The King's" Hussars is a crown atop which is a lion statant guardant all within the garter of the Order of the Garter, which bears the phrase honi soit qui mal y pense. Below these elements is a scroll with the words "The King's XV Hussars".

None of these are, strictly speaking, heraldry, but they certainly are heraldic in the sense that they are each a visual representation of a regiment of HM Armed Forces, as well as a token of the esteem in which the men they memorialize were held by the men with whom they served.