Now we come to an armorial tomb set along a wall in Canterbury Cathedral. 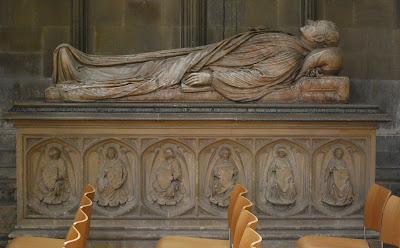 As the sign next to it notes, this is:

I could copy a lot of stuff off the internet about Bishop Broughton, but really, it's probably a lot easier for both of us if you just look at his entry on Wikipedia at https://en.wikipedia.org/wiki/William_Broughton_(bishop) (Besides, if you do go to the Wikipedia page, you can see a painting of him, as well a the copy of this tomb (in which he is buried) at St. Andrews Cathedral in Sydney, Australia (in which he is not).

But of course it was the six armorial shields being supported by angels along the side of his tomb which caught my attention. (As always, you can click on one of the images here to see a larger one with more detail.) Going from left to right, we find: 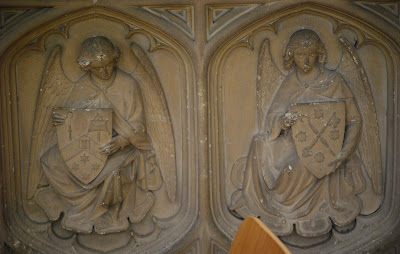 To the left we have the arms of the Diocese of Melbourne (Azure on a chevron argent between in chief a crosier and a palmer's staff and scrip or and in base four mullets of six points one two and one argent an open book proper); and to the right, the arms of the Diocese of Tasmania (Azure, a crosier in bend surmounting a key (wards upwards and outwards) in bend sinister or between four mullets of eight points argent (representing the Crux Australis). 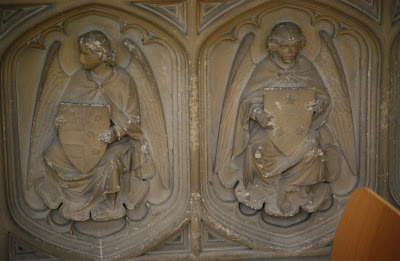 The arms of Bishop William Broughton/Diocese of Sydney (Argent two bars and on a canton gules a cross argent, impaled by Azure four mullets of eight points in cross argent). The arms on the sinister side of the shield (to the viewer's right) were granted on February 22, 1836 to Broughton as the first Bishop of Australia, and later on November 10, 1967, to the diocese of Sydney. This same shield is shown in the Broughton windows in St. James’ Church, Sydney, and in St. John the Baptist’s Church, Ashfield, except that those reverse the two sides in the more generally accepted pattern, placing the Diocesan arms to dexter (the viewer’s left) and the Broughton arms to sinister (the viewer’s right). 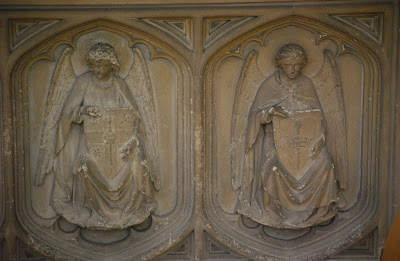 The arms to the left may be a version of the Anglican Church of Australia, which were granted in 1967 and are blazoned Azure on a cross gules fimbriated argent a mitre or between four mullets of eight points argent. The version here, which precedes the grant by over a century, places a crosier on the cross behind the mitre, and moves the four mullets to the field around the cross.

Cecil Humphrey-Smith identifies this shield as the arms of the Diocese of Adelaide, Argent on a cross between four estoiles gules a pastoral staff overlaid by a mitre or.

The second coat is the arms of the Diocese of Newcastle: Gules a pastoral staff enfiled with a ducal coronet or all within a bordure sable semy of billets palewise argent. (The billets on the bordure are very hard to see here, but if you look closely at a larger image, they are there.)

All in all, a nice display of heraldry from the Antipodes.