After the somewhat understated tomb of William Grant Broughton, Bishop of Australia, which we reviewed in the last post, we come to the somewhat more florid tomb of Edward White Benson, Archbishop of Canterbury from 1883 to 1896. 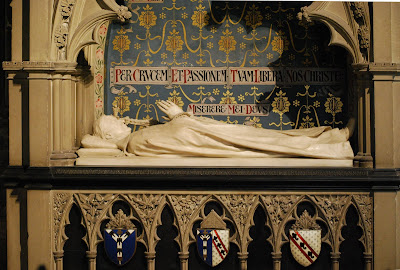 No, really, you should click on the picture above to see a larger, more detailed copy. It's worth it. I'll wait.

The tomb is emblazoned with the epitaph Benson had chosen: Miserere mei Deus Per crucem et passionem tuam libera me Christe ("Have mercy on me O Christ our God, Through Thy Cross and Passion, deliver thou me").

As with so many of the other "notables" buried, entombed, and/or memorialized in Canterbury Cathedral, you can find more information about Archbishop Benson's life in his article on Wikipedia at https://en.wikipedia.org/wiki/Edward_White_Benson.

But, of course, my passion is heraldry, and it was the three coats of arms along the base of the tomb which truly caught my attention. 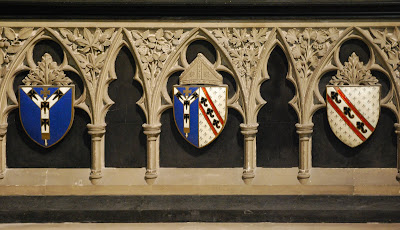 The three shields are, from left to right:

The arms of the See of Canterbury, which we have seen quite a number of times in our review of the heraldry of the City of Canterbury and of Canterbury Cathedral, Azure a cross-staff or with its cross argent overall a pall argent charged with four crosses formy fitchy sable.

The impaled arms of the See of Canterbury with the personal arms of Archbishop Edward Benson, Azure a cross-staff or with its cross argent overall a pall argent charged with four crosses formy fitchy sable, impaled by Argent three trefoils slipped sable between four bendlets gules (Benson).

Yes, I know that the arms here are painted such that you only see two red bendlets. Take my word for it, there are supposed to be four of them.

Additionally, Cecil Humphrey-Smith notes that: The field argent is strewn with trefoil-looking objects giving the appearance of ermine, but the Archbishop’s field should be argent. It is also observed that whilst on his seal as Archbishop there are three trefoils as here, on his seal as Bishop of Truro he bore a quatrefoil between two trefoils [between four bendlets].

So, there's apparently nothing like being able to change things up.

In any event, it truly is a beautifully wrought tomb, and the enameled shields are as bright and crisp as the day they were first installed.