This next armorial memorial in Canterbury Cathedral is a comparatively simple one, and yet I can't help but think it holds every bit as much love and pathos as many of the larger, more complex ones. 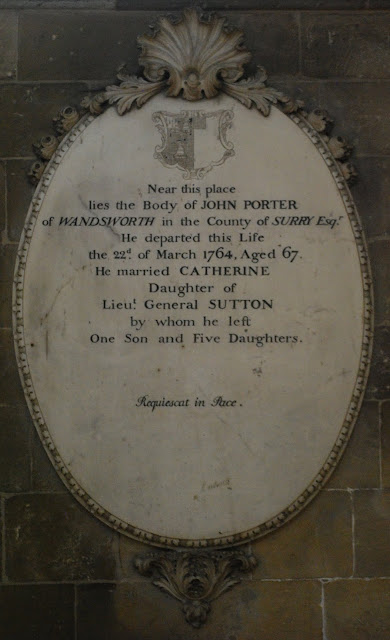 Near this place
lies the Body of JOHN PORTER
of WANDSWORTH in the County of Surry Esqr.
He departed this Life
the 22d of March 1764, Aged 67.
He married CATHERINE
Daughter of
Lieut. General SUTTON
by whom he left
One Son and Five Daughters.


John Porter of Allfarthing, married Catherine Sutton, daughter of Lt. Gen. Richard Sutton, and by her had six surviving children. The manor of Allfarthing, in Wandsworth (London), had been granted by James VI and I to his son Charles, apparently with a view toward it being given to Endymion Porter. Thomas Porter, son of Endymion, had a remainder interest but debt problems of his father caused the loss of the manor in 1652. Thomas Porter's brother, George Porter, recovered the manor and it descended to John Porter of Allfarthing, who was lord of the manor in 1723 when he married Catherine Sutton.

Still, it was the arms at the top of the memorial plaque which caught my attention. 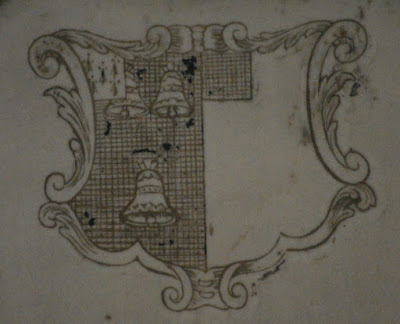 I find it interesting that both the husband's and the wife's coats of arms contain a canton; this is something that is not commonly seen. A canton is a rare enough charge; to find two of them must be very rare.

They did seem to go in for some pretty florid shield shapes in the late 18th Century, though, didn't they?