An Armorial Memorial to a Prebendary

I learn a lot doing some of the research for these blog posts. In this instance, I realized that I really didn't know what the term "prebend" meant. So I looked it up.
a stipend allotted from the revenues of a cathedral or a collegiate church to a canon or member of the chapter."

In other words, it's a cool thing to have a prebend. (I don't think I would qualify for one.)
an honorary canon having the title of a prebend but not receiving a stipend."

In any event, our next monument in Canterbury Cathedral is to a man who was advanced to a prebend of the Cathedral. 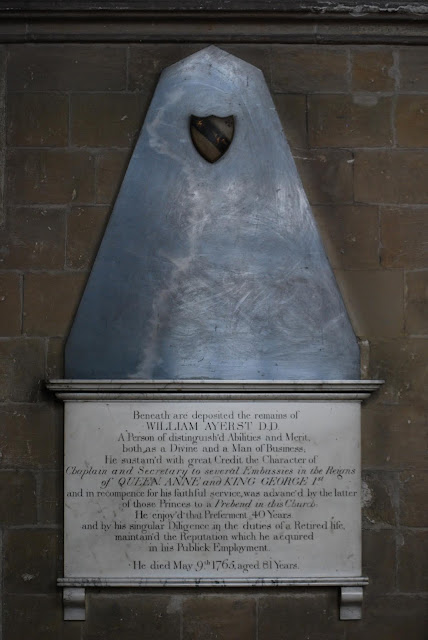 Beneath are deposited the remains of
WILLIAM AYERST D.D.
A person of distinguish’d Abilities and Merit,
both as a Divine and a Man of Business;
He sustain’d with great Credit the Character of
Chaplain and Secretary to Several Embassies in the Reigns
of QUEEN ANNE and KING GEORGE 1st
and in recompence for his faithful service, was advanc’d by the latter
of those Princes to a Prebend in this Church:
He enjoy’d that Preferment 40 Years
and by his singular Diligence in the duties of a Retired life,
maintain’d the Reputation which he acquired
in his Publick Employment.

His entry in the list of 'Canterbury cathedral: Canons' in The History and Topographical Survey of the County of Kent: Volume 12, states:

WILLIAM AYERST was installed in the third prebend of Canterbury Cathedral on Nov. 5, 1724. He was educated at Maidstone school, and then at University college, Oxford, and afterwards was fellow of Queen's college, in Cambridge; in 1703 he attended lord Raby, afterwards earl of Stafford, to the court of Berlin, as chaplain and secretary to the embassy; and again to the Hague in 1711, and to the congress of Utrecht in 1712; in the succeeding reign he attended Sir Robert Cotton, as chaplain of the embassy to France. He had been, at times, rector of Gravesend and Sturmouth, and vicar of Northfleet, and was afterwards rector of St. George and St. Mary Magdalen, Canterbury, all which he resigned, and in 1724 was promoted to this prebend. He published an elegant edition of Sallust, which he dedicated to Sir Joseph Williamson; he died on May 8, 1765, age 83, being then rector of North Cray, in this county, and of St. Swithin's, London. He was buried in the middle of the nave of the cathedral.

But it's really the heraldry that we're here for, and here is the shield placed near the top of the memorial. 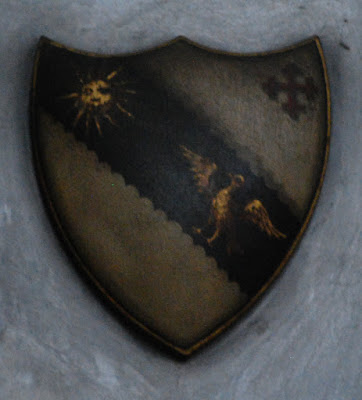 The arms are blazoned: Argent on a bend engrailed sable a sun in his splendor in chief and an eagle rising wings expanded in base or, in sinister canton a cross crosslet gules.

Burke’s General Armory makes the eagle argent and the cross in sinister chief flory. Unfortunately, he cites no source for these arms, making a determination of which version is correct - the one painted here, or the blazon in the General Armory - extremely difficult.

That confusion notwithstanding, it's an interesting coat of arms, and the minor differences between the two sources do not make it any less so.