An Armorial Memorial to a Lord Who Loved the Cathedral


Making our way into the Cathedral proper, we walked by this modest armorial memorial plaque: 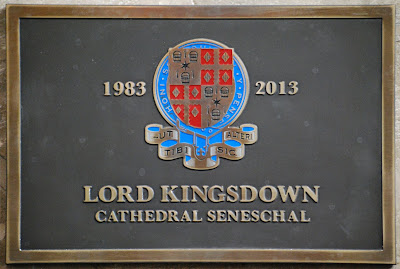 Robin Leigh-Pemberton (1927-2013), was the son of R.D. Leigh-Pemberton, educated at Eton, and won a scholarship at Trinity College, Oxford. He won the Sword of Honour at Sandhurst, saw active service with the Grenadier Guards, and practiced as a barrister before embarking on a successful business career, which saw him take the role of Chairman of NatWest Bank in 1977. In 1953 he married Rosemary Forbes, daughter of the Dowager Marchioness of Exeter. In 1983 he was appointed Governor of the Bank of England by Margaret Thatcher. He was Lord Lieutenant of Kent 1982-2002. 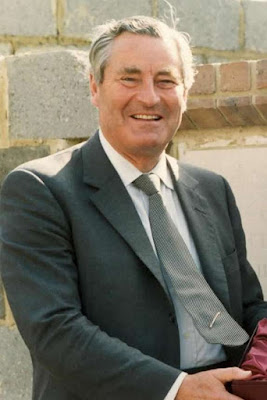 Lord Kingsdown's arms are blazoned: Quarterly: 1 and 4, Ermine an estoile or between three buckets sable hoops and hadles or (Pemberton); 2 and 3, Gules a cross engrailed argent between four lozenges ermine (Leigh). His motto, on the scroll beneath the shield, is: Ut tibi sic alteri (Do unto others as you would to yourself).