Our next armorial memorial in Canterbury Cathedral is to a Captain in H.M. Navy who took part in a famous (at the very least on this side of the Atlantic) naval encounter during America's Revolutionary War. 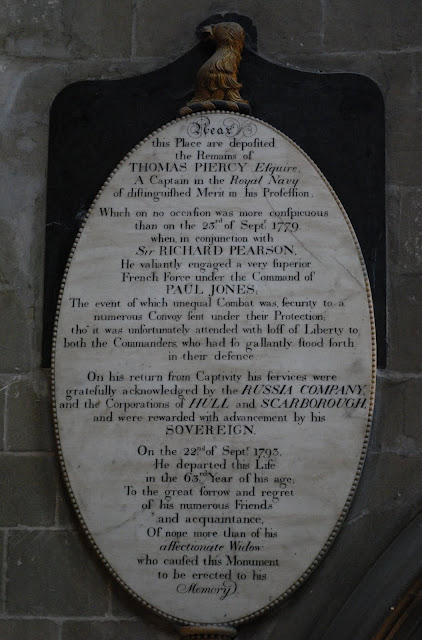 Near
this Place are deposited
the Remains of
THOMAS PIERCY Esquire
A Captain in the Royal Navy
of distinguished Merit in his Profession.

Which on no occasion was more conspicuous
than on the 23rd of Septr. 1779
when, in conjunction with
Sir RICHARD PEARSON,
He valiantly engaged a very superior
French Force under the Command of
PAUL JONES;
The event of which unequal Combat was security to a
Numerous Convoy sent under their Protection;
tho' it was unfortunately attended with loss of Liberty to
both the Commanders who had so gallantly stood forth
in their defence.

On his return from Captivity his services were
gratefully acknowledged by the RUSSIA COMPANY,
and the Corporations of HULL and SCARBOROUGH,
and were rewarded with advancement by his
SOVEREIGN.

On the 22nd of Septr. 1793,
He departed this Life
In the 63rd Year of his age;
To the great sorrow and regret
of his numerous Friends
and acquaintance,
Of none more than of his
affectionate Widow
who caused this Monument
to be erected to his
Memory.

The battle of September 23, 1779, mentioned here is the well-known American Revolutionary War engagement between HMS Serapis under Captain Richard Pearson and the Bon Homme Richard (the refitted East Indiaman Duc de Duras) under John Paul Jones, during which Captain Pearson called out to Jones asking if he surrendered, and Jones replying "I have not yet begun to fight!" Jones ended up receiving Pearson's surrender, following which he abandoned his own sinking ship and took command of the Serapis under American colors.

There is no coat of arms on this memorial, but there is a crest at the top: 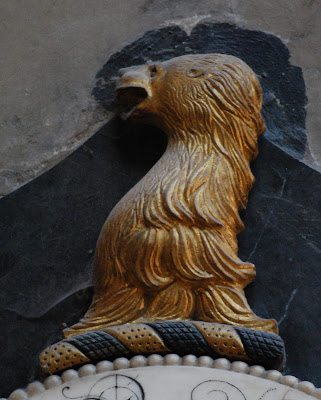 On a wreath or and sable, a lion’s head erased or.

I have not (yet) found a coat of arms for Capt. Piercy. For that matter, I have not found this crest associated with that name, either. The closest I can find in Fairbairn’s Crests is “Pearsall, Eng., a lion’s head, erased, or.”

Could this be a case of “bucket shop” heraldry, where someone “borrowed” a crest from another family with a similar-sounding surname and ascribed it to Captain Piercy here? It is not unknown for such to have happened in the 18th Century; the Gore roll of arms compiled in Boston, Massachusetts in the early and middle 1700s has some examples of exactly that procedure.