Our next armorial memorial in St. Martin's, Canterbury, has, along with two other coats of arms, the arms of Austen which we saw in our last post. 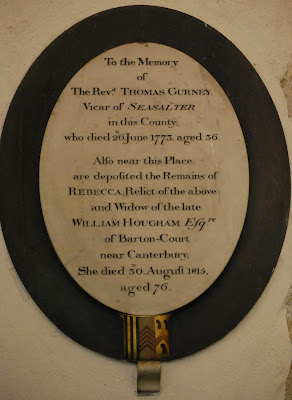 Once again, of course, it was the unusually marshaled arms at the base of the memorial which caught my eye. 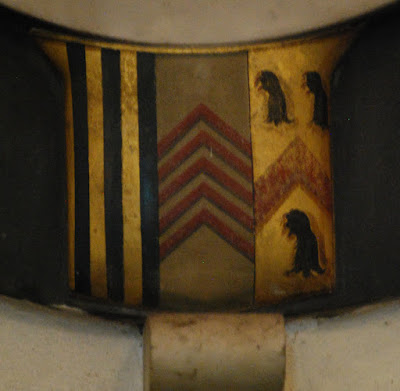 Tierced per pale; 1, Paly of six or and azure(?) (Gournay/Gurnay); 2, Or five chevronels gules (Hougham); 3, Or a chevron gules between three lion’s jambes erased sable (Austen).

Burke's General Armory finds: Gournay/Gurnay: Paly of six or and azure; the paly here looks like or and sable, but that may be a trick of the light.

The third coat of arms here is Austen, as can be found on the memorials to Nathaniel Lawrence Austen, Sr. and Jr., discussed in Part 1 of this tripartite post.

Given the three coats of arms painted here, I have to assume that Rebecca Gurney was borne Rebecca Austen. The inclusion of her first husband's arms here is unusual.