Finally, we come to our final heraldically-related memorial in St. Martin's, Canterbury. 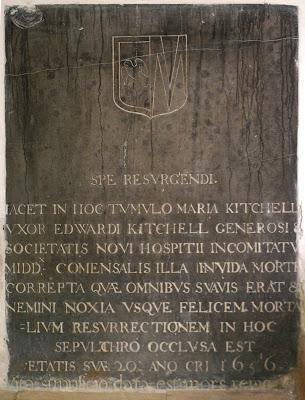 The Latin inscription has been translated (not by me, I have to use one of the on-line Latin-English translators for something like this) as:


In hope of resurrection
lies in this grave Mary Kitchell,
wife of Edward Kitchell, gentleman and
member of the New Inn in the county
of Middlesex. Snatched away by envious death,
she who was gentle to all and
hurtful to none is enclosed inside this tomb until
the joyful resurrection of the dead.
In the 20th year of her life, in the Year of Christ 1656

The last line of Latin may be slightly mistranscribed, but means something like:

Life is given to him that prays, death is the remedy.


Once again, we look at the marshaled coat of arms on the memorial: 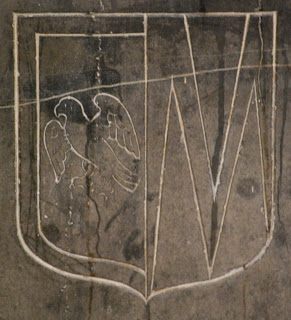 Others have tried to identify the arms, with this result:

[Azure] within a bordure [or] a falcon rising with wings displayed and belled [or] for KITCHELL impaling [argent] a pile issuing from the chief within two piles from the base [sable] for HURLOE?

(I would have blazoned the central charge first: Azure a a falcon rising wings displayed within a bordure or, but maybe that's just me.)

As for the wife's arms (to sinister), of which you may remember the pattern from the quartered arms of Austen in my previous to last post, I can find no "Hurloe", and have no idea where that name came from.

I did, however, find in Papworth: Argent three piles one issusng out of the chief between two others reversed sable. Hulles, Hules, Hulsey, Huls, or Howes, Newbury, co. Berks, and Bethersden, Kent. Given that information, I suspect that "Hurloe" above may be a mistranscription of Hulles or Howes.

So there you have it, four armorial memorials to three different families, but with heraldic ties between them to the Austen and Hulles/Huls/Howes families.