The other day, my wife and I had a little over an hour to kill away from home, and so we dropped by one of our favorite antique malls in Dallas, not to buy anything, but to look around and give us something to do while we waited.

We should know better. We really should. Just over $130 later, we managed to get back to the car and off to the appointment we were waiting for.

Why so much? Well, partly because of this little piece we found there. 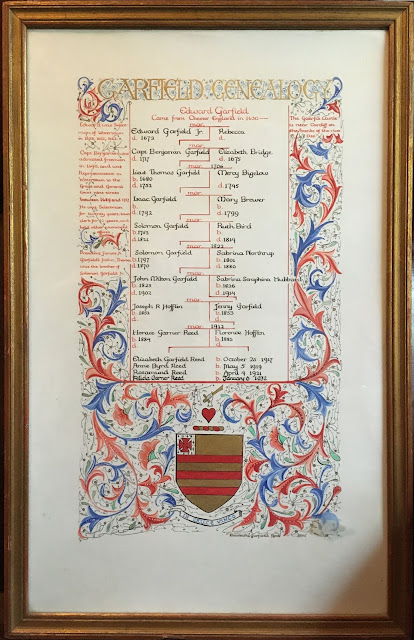 It's a beautifully calligraphed, illustrated, and framed descent tree, done by one of the ladies named at the bottom of the tree, Elizabeth Garfield Reed, back in 1931.

(Why, yes, I do use the Oxford comma. Doesn't everyone? No? Well, they should.)

Of course, it was the painted coat of arms that first caught my eye, but then, looking at the names on the descent, in addition to Sabrina Seraphina Hubbard (I have Hubbards on my family tree; Sabrina here is no relation that I can find), was the name of Mercy Bigelow.

I also have Bigelows on my family tree, so I whipped out my phone which has my Ancestry tree on it, and sure enough, there was Mercy Bigelow. So you can see that I had to buy this.

Naturally, I did a little more research, and was able to confirm that my Mercy Bigelow is the same person as the Mercy Bigelow on this tree.

Burke’s General Armory gives the following for the coat of arms for Garfield:

Garfield. Or three bars gules on a canton ermine a cross formy gules. Crest: Out of a human heart a hand holding a sword all proper.

(The image below of the crest comes from Fairbairn's Crests.) 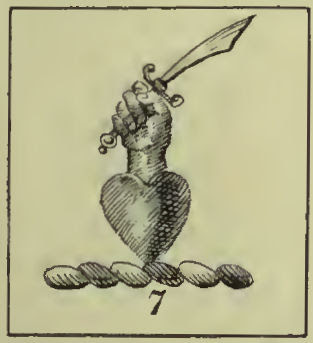 Burke also has: Garfield (Kilsby, co. Northants, and Tuddington, co. Middlesex; Benjamin Garfield, Esq., of the latter place, grandson of Ralph Garfield, of the former. Visitation of Middlesex, 1663). Or three bars gules on a canton ermine a cross gules, quartering [three other coats]. But with a crest: Out of a ducal coronet or a cross of Calvary gules. So the crest here is entirely different.

The motto given on the tree is In cruce vinco (I conquer by the cross). Per Fairbairn’s Crests, Copley uses that motto. No motto is cited by Fairbairn for Garfield.

So there you have it! A beautifully calligraphed, illustrated, and painted descent, with marginal notes on a few of the individuals in the tree, which not only contains some lovely heraldry, but a distant relative of mine.

All because we had an hour to kill and decided on a whim to stop by and look. How's that for some great serendipity?

Email ThisBlogThis!Share to TwitterShare to FacebookShare to Pinterest
Labels: genealogy