International Heraldry Day, first celebrated in 2013, focuses one day each year when heraldry in all its forms is celebrated worldwide. Regardless of jurisdiction, geographic area, customs, favored styles and favored period, the community focuses on wider joys of heraldry. The goal of the original organizers was that eventually all heraldry enthusiasts will acknowledge the event in the years to come. 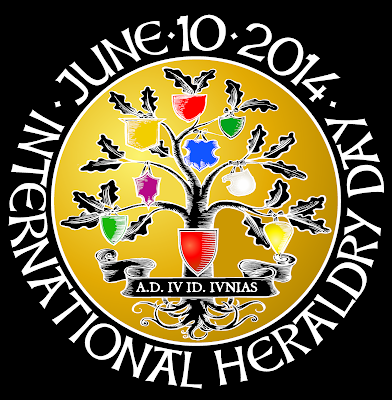 Why June 10?  On that day, in the year 1128, in Rouen, Geoffrey Plantagenet, Count of Anjou, was knighted by his future father in law, King Henry I Beauclerc. During the ceremony a shield of blue decorated six golden lions was suspended on the neck of the young knight. This shield is recognized by most heralds, for the first time in history, as a fully formed coat of arms ...

... because these same arms were later borne by Geoffrey's grandson, William Longspee, Earl of Salisbury.