It's always a bit interesting to run across heraldry, or more often, heraldry-like objects, on store signs, storefronts, and advertising for shops of one kind or another. It's "interesting" because it's sometimes a toss-up as to whether the heraldry is an actual coat of arms or just something made up that the shop owner thought looked nice and gave the impression he or she was trying to make.

In the specific instance at hand, I suspect that the arms for this little shop in Arras, France are invented, but see and decide for yourself. 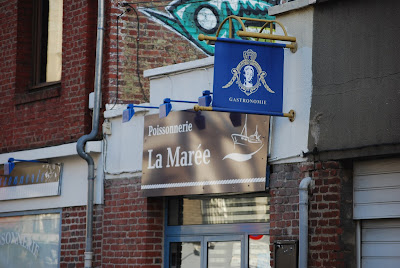 It's a little fish shop named "La Marée" (The Tide), but it's the blue banner affixed to its front wall that really caught my attention. 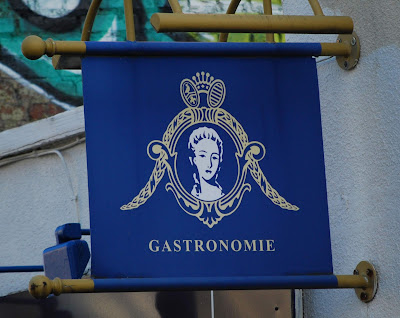 The central image is the bust of a woman (perhaps a Marie, playing on the name of the shop?); but at the top are two coats of arms and a coronet. 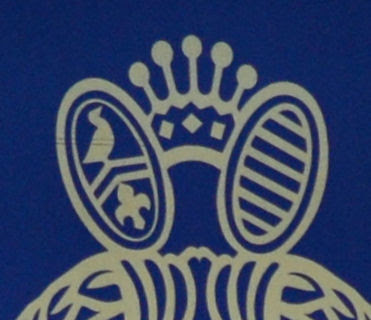 The coronet appears to be that of a French comte, or count, with four pearls hidden, two behind each shield.

The left-hand shield is two chevronels between a duck statant to sinister atop the uppermost chevronel and a fleur-de-lis, and the right-hand shield is seven bars (or, perhaps, barry of thirteen).*

The style of the shields, especially the husband's (on the left) makes me think these "arms" are invented for the shop. I could be wrong, of course, but it's not an arrangement of charges that I have seen before, and so I am skeptical that it is real heraldry.

Still, it's yet another use of heraldry (or pseudo-heraldry), and I tend to think that that's a Good Thing™, if only because it shows that people still respect heraldry to a greater or lesser degree.

*  Though in English blazon this would always be seven bars, "Foreigners make no matter, neither in Paly, Barry, nor Bendy, whether the pieces be even or odd, provided they be of an equal latitude; and therefore amongst them you as often meet with Paly, Barry, and Bendy of 7 and 9, as 8 and 10." (John Gibbon, Introductio ad Latinum Blasoniam, 1682, p. 5)