If I'm at a museum, no matter how many times I've been there before, when I get the opportunity to go again, I'm going to look around to see what's new or if there's something I hadn't noticed before.

The members of my Camp of the Sons of Union Veterans of the Civil War had been invited to the Texas Civil War Museum to see the regimental flag for which we had donated some money to conserve in its final restored state. (My last post contains pictures of this 150+ year old flag of the 45th New York Infantry Regiment.)

So while there, we all wandered about a bit to see what we could see, and I ran across another regimental flag on display, which contained an unusual "coat of arms" as its central element. 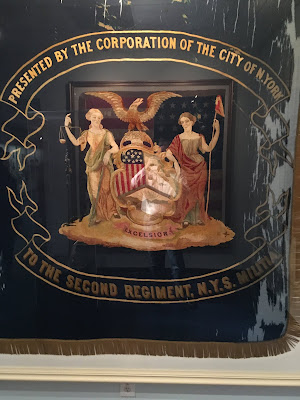 The unit to which this flag had belonged more than 150 years ago was the Second Regiment, New York State Militia (which was later redesignated the 82nd Regiment of Infantry) during America's Civil War (1861-1865).

The central element of the flag contains an achievement of arms based on that of the State of New York, having the same crest, motto, and supporters (for which, see my previous post). But the shield itself has been divided "per pall reversed" into three: 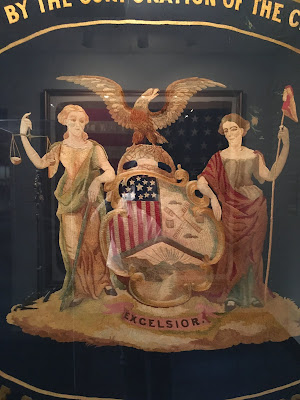 The upper left portion of the shield (dexter chief) contains the (incorrect) arms of the United States (this version has twelve rather than thirteen stripes, and places stars on the chief which are not present in the actual arms of the U.S.).

The upper right portion of the shield (sinister chief) contains the arms of the City of New York, the arms of a windmill set saltirewise between in pale two beavers statant and in fess two barrels/tuns palewise. 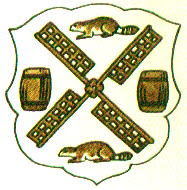 Finally, the lower third of the shield contains the landscape arms of the State of New York, a scene of the Hudson River with the sun rising over a mountain peak beyond the river..