Continuing my ramble around the Place des Héros in Arras, I came across this shop: 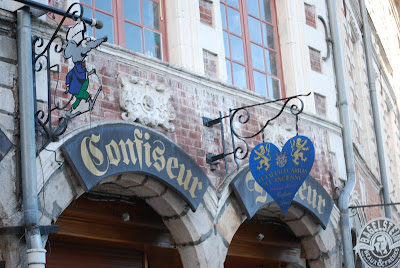 (I know it's hard to do, and I admit having trouble doing it myself, but try to ignore that cute rat on the left.)

I didn't go into the shop - it was still fairly early in the day, and it wasn't open yet - but I couldn't pass the sign. 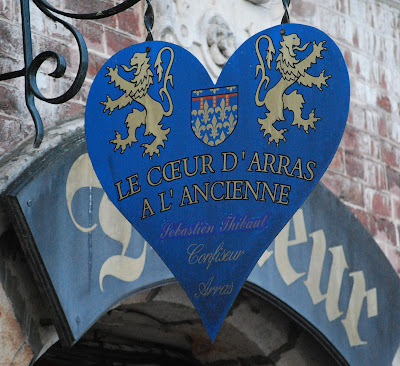 This confectionary (confiseur = confectionary) shop's sign translates roughly as "the heart of Arras in the old" (presumably meaning in the "heart of the old part of the city").

But of course it was the two lions (rampant addorsed, though the herald in me would prefer to see them combattant, facing each other) and between them the shield of the arms of Artois, which also appear on the inescutcheon on the arms of the city of Arras, as noted just a few posts ago.

It's not necessarily the correct use of heraldry, but it's nice to see local heraldry being used, even if it is just to advertise a confectioner's shop.