An Armorial Memorial to a Lady


Along one wall inside St. Margaret's Chapel, Westminster, is a memorial described in The History of the Parish Church of Saint Margaret, Westminster, by Walcott (1847)as:

A large raised Alabaster Tomb, with the recumbent coloured figure of a Lady. 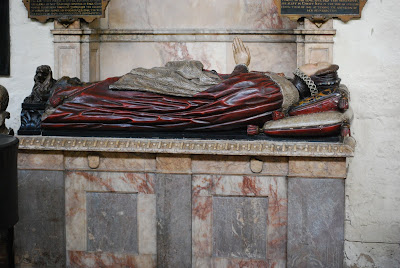 (I had my telephoto lens on the camera, and didn't take the time to switch it out with the regular lens. So the pictures here are of the monument in bits and pieces.) 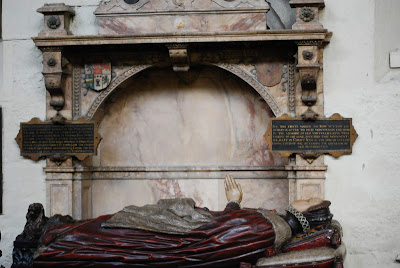 The tomb is that of Mary (or Marie), Lady Dudley, daughter of William Howard, first Baron Howard of Effingham, Lord High Admiral of England (the ninth son of Thomas Howard, second Duke of Norfolk); and sister of Charles Howard of Effingham, Earl of Nottingham, Lord High Admiral. She married, first, Edward Sutton, Lord Dudley, and second, Richard Montpesson, Esq. She died on August 21, 1600. 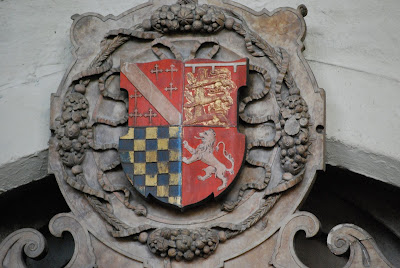 There are two shields with visible painted charges on them.

The large one at the top is her paternal arms, the well-known arms of Howard, blazoned: Quarterly: 1, Gules a bend between six crosses crosslet fitchy argent (Howard); 2, Gules three lions passant gardant in pale or in chief a label of three tags argent (Brotherton); 3, Checky or and azure (Warren); and 4, Gules a lion rampant argent armed and langued gules (Mowbray).

The arms as painted here are missing the augmentation on the bend in the first quarter and the octofoil mark of difference for a ninth son which should be in the center of the shield. See, e.g., https://en.wikipedia.org/wiki/William_Howard,_1st_Baron_Howard_of_Effingham 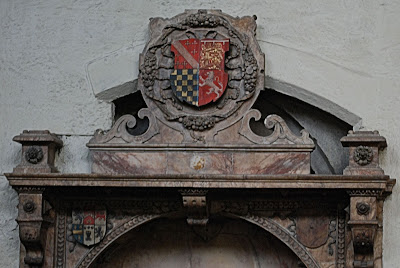 Underneath the mantle are two shields. The one on the right contains no discernible figures that I could make out, but it is probably meant for the arms of her first husband, Edward Sutton, Baron Dudley, Or a lion rampant double-queued vert.

The shield on the left is the arms of her second husband, Richard Montpesson: Quarterly: 1 and 6, Argent a lion rampant sable (Montpesson); 2, Gules a chevron ermine between three leopard's faces or; 3, Argent a lion passant gules; 4, Azure a fess between three fleurs-de-lys or; and 5, Argent a tower and in chief three roundels sable.

(In the fifth quarter, Walcott blazons the primary charge as a water bouget, but it is clearly drawn as a tower, or even a tower triple-towered on the monument.)

I have been unable to find much information about Richard Montpesson beyond his marriage to the widowed Lady Dudley, and even less about his coat of arms, which do not appear in Burke's General Armory or in Rietstap's Armorial Général.

Still, this monument really is all about her, and it truly is a testament to her life.