Another Game With Heraldry


There are a few games around that involve heraldry.

Sometimes a "game" can be a task that a few bored heralds may assign to themselves. I was involved with one of these, where six of us, having been left pretty much unsupervised, tried to create a coat of arms consisting of a field and a single standard heraldic charge that everyone who saw it would say was "too complex."

I think we may have succeeded. This is what we came up with: 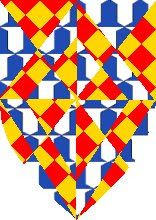 The blazon is: Gyronny [of eight] lozengy gules and or, and vair, a mascle throughout counterchanged.

Other heraldic games try to combine some fun with education, like the "Heraldic Bingo" game that can be purchased from http://www.appletonstudios.com/BooksandGames.htm

Well, the other day over on Reddit, I saw a new heraldic variant of an old game that someone has come up with: Heraldic Telephone. The way it is played is described as:


(If you want to see something of the way it can go, you can see the results of a round played in April of this year at https://old.reddit.com/r/heraldry/comments/8du5k8/april_2018_telephone_game_results/)

What an intriguing concept! And it's the kind of thing that could be played on-line or in person with friends with a few pieces of paper. (Well, you'd also want something to write with, and colored pencils or Crayola markers or something similar to draw the coat[s] with.)

What an interesting idea for the next time you're sitting around with some other heraldry enthusiasts and want a fun way to pass the time.