How Genuine Is This Coat of Arms?


This next memorial in St. Margaret's Chapel, Westminster, is another old one, memorializing the death of a man in 1640, as well as two of his children, Richard and Elionor, and Richard's wife Elizabeth. 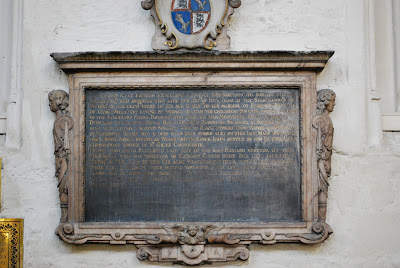 There's a lot of text on that plaque, not all of which came out entirely legible on either of the two photographs I took of it. (You can click on the image above to see the clearer of the two large pictures of the memorial.) In brief, it is a memorial to Richard Willis, Esq., who died June 21st, 1640 at the Starchamber in Westminster. His wife, Eleanor White, by whom he had eight children, was still living at that time. His son Richard erected this monument. The text then goes on to mention the other family members who are buried nearby.

But, of course, it was the coat of arms at the top of the memorial which caught my eye. 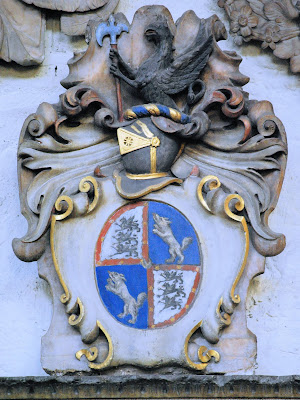 As painted, I would blazon the arms: Quarterly: 1 and 4, Argent three griffins passant in pale sable within a bordure engrailed gules bezanty; 2 and 3, Azure a wolf salient argent langued gules; overall at the fess point a crescent argent for difference. The crest atop the wreath (which ought by right to be argent and sable, not or and azure) is: A demi-griffin sable holding in its talons a poleaxe proper headed (azure?).

The History of the Parish Church of Saint Margaret, Westminster by Walcott, 1847, gives the field in the second and third quarters as sable, and makes the battle axe fully sable like the demi-griffin. So there may be some mis-painted tinctures here.

The real trouble, though, is that I cannot find this coat of arms anywhere. It appears to be a bit of a mashup, and the sort of thing that one might expect to find being sold as "your family crest" by some heraldic bucket shop.

The arms in the first and fourth quarters are similar to - and different from - these two entries in Burke's General Armory for Wills (no second "i"): Argent three wyverns passant in pale a bordure engrailed sable bezanty (Wills, Landarke, county Cornwall), and Argent three griffins passant in pale azure murally gorged argent a border sable bezanty (Sir Charles Wills, K.B., died 1741). The crests are, respectively: A demi-griffin azure wings addorssed holding with both claws a battle axe proper, and A demi-griffin segreant azure murally gorged or sustaining a battle axe proper.

The arms in the second and third quarters may be Downe: Azure a wolf salient langued and armed gules. If the field is truly supposed to be sable, though, the closest match in Papworth's Ordinary of British Armorials is Loude/Louthe/Lowte: Sable a wolf salient and in dexter chief a crescent for difference argent.

As I said, similar but different, both the arms and the crests.

The name on the memorial is quite clearly Willis, and is given as Willis in Walcott's book as well. Yet the arms appear to be a variant of Wills.

So is this coat of arms the product of a bucket shop heraldist? It is certainly possible, because we know that heralds were complaining about the work of some of the painters of heraldry at least as early as 1610, thirty years before this memorial, when John Guillim wrote in his A Display of Heraldrie:


In which respect it were fit that common Painters, the common disorderers of these tokens of honour, were better looked unto; who both in former ages, and much more in these daies, have greatly corrupted these honourable signs, by adding their new fantasticall inventions; that so they might make the things borne in Coat-Armour more perspicuous to the view, or because they would be thought to be well overseen in Heraldry. For indeed they want the eye of judgment, to see and discerne that such is the excellency of these honourable tokens, that the least alteration either by augmentation, diminution, transposition, or whatsoever other means, doth occasion a change in them so great, as that they thereby differ from themselves, not onely in their accidentall, but also in their substantiall parts, and cease to be any longer the same they were before, and their owners are debarred to challenge an propriety or interest in them, in respect of such alteration.  Modica alteratio in membro principali magnam alterationem facit (saith the Philosopher) A little alteration makes a great alteration in a principall part. As the least spot in the Eye, which is the worthiest part of the face, doth more disfigure the same, than ten times so much in any other member of the whole body.


And it was still going on 200 years later when William Berry wrote in his An Introduction to Heraldry:


[E]very coach, house, and sign painter pretends to a knowledge of the science of heraldry, rather than lose the job when offered.

I don't know that the coat of arms for this family memorial is a result of a bucket shop herald, but given the other evidence, I cannot say that it isn't.