To return from our recent posts of "heraldic things I got distracted by" ("Ooh, shiny!") to go back to a final few heraldic monuments still to be shared from St. Margaret's Chapel, Westminster. Here, we have the memorial to John Dorington, Esq., and his wife, Sarah. (You can click on the image to see the larger photograph of this memorial.) 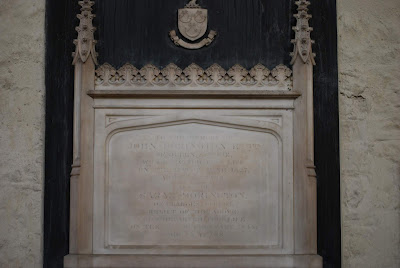 To the memory of
JOHN DORINGTON, ESQRE,
of Queen Square,
Who departed this life
on the 27th of June, 1827,
aged 74 years.

Also of
SARAH DORINGTON,
of Clarges Street,
Relict of the Above,
Who departed this life
on the 13th of February, 1845,
Aged 85 years.

Though uncolored here, the arms are blazoned in The History of the Parish Church of Saint Margaret, Westminster by Walcott (1847) as Sable three bugle horns argent stringed gules. 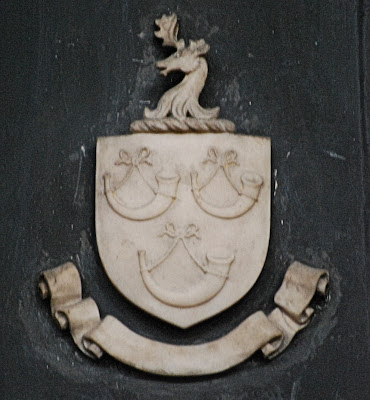 There is no entry for Dorington in Burke’s General Armory.

Burke gives the same attribution for these arms, but gives the crest as A lion’s jambe proper holding a flag gules charged with a chevron or.

Fairbairn’s Crests gives that crest cited in Burke as belonging to Dorington and Dorrington, as well as to Dodington.

No sources give the crest as it appears on the monument, which I take to be A stag’s or hart’s (or possibly an elk’s) head erased.

According to Burke’s Landed Gentry, John Edward Dorington, Esq., of Lypiatt Park (b. 1832), was the son of John Edward Dorington, Esq., of Lypiatt Park (d. 1874), and the grandson of John Dorington (d. 1827) and his wife Sarah Columbine (d. 1845), who are memorialized here. The Landed Gentry gives the arms of Dorington of Lypiatt Park as Sable three bugles argent stringed gules, with the motto Strepitus non terret ovantem (for which I find no entry in Fairbairn’s, and so no translation, except for a somewhat opaque one from one of the Latin-to-English on-line translators, which results in “Noise that scares mounting”).