A Portrait of a Young Man


Our next armorial memorial is a charming one to a young man who was taken in what some would call "the bloom of life." 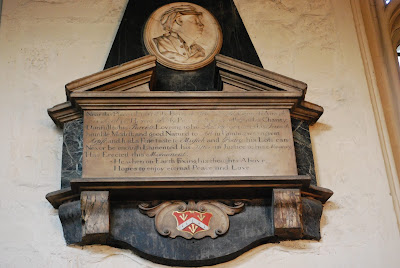 Topped by a carved relief portrait of the young man being memorialized, the inscription taking up the main portion reads:


Near this Place is Interred the Body of Willm Arnold, Gent. ob:Aug:23:
1734 Aged 25. He was ftrictly Pious juft & boundless in his Charity:
Dutifull to his Parents Loveing to his Relations: true to his Friend:
Humble, Modeft, and good Natured to All. In Painting was a great
Artist, and has a Fine taste to Mufick and Poetry: his Lofs can
Never be enough Lamented: his Sister in Justice to his Memory
Has Erected this Monument.
He when on Earth Fixing his thoughts Above,
Hopes to enjoy eternal Peace and Love.

Once again, as usual, I noticed the shield first, and the rest of the monument after. 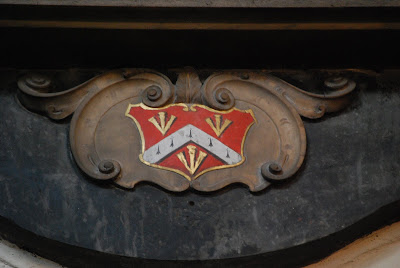 Burke's General Armory gives these as the arms of Arnold (Gloucestershire, granted 1653): Gules a chevron ermine between three pheons or.

The History of the Parish Church of Saint Margaret, Westminster by Walcott (1847), gives the same blazon for these arms, but gives us no additional information about young William Arnold. Nor have I been able to find him in any of my usual internet searches. (Lots of other William Arnolds, yes; even one who died in 1734, but aged a number of years older.)

Still, it's a very sweet memorial by a loving sister to her brother, in addition to displaying some remarkably simple heraldry.