An Armorial Memorial to Two Children


Continuing our look at some of the armorial memorials in St. Margaret's Chapel, Westminster, we find this one from a couple memorializing two of their children: 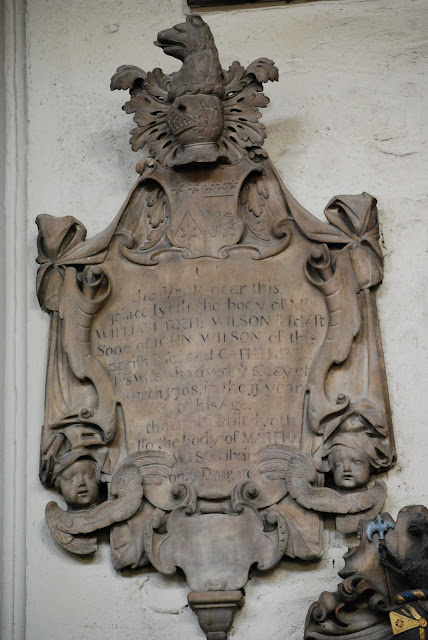 
IN
the Vault near this
place lyeth the body of MR
WILLIAM RICHD WILSON Eldest
Sone of JOHN WILSON of this
Parish, Etc. and CATHERINE
his Wife who dyed ye 8th day of
March 1708, in the jjth year
of his Age.
In the same Vault lyeth
alfo the body of MARTHA
WILSON their
only Daughter. 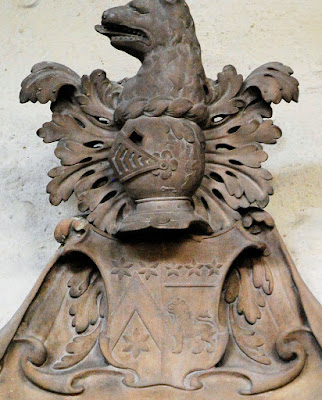 The History of the Parish Church of Saint Margaret, Westminster by Walcott (1847) does not mention the coat of arms and crest, nor do I find the arms described in any of the other guidebooks, so I have no idea of the colors.

Burke's General Armory has a citation for Wilson (West Wickham, co. Kent; confirmed at Edinburgh, 20 July 1762). Argent on a chevron between three mullets gules a crescent argent. Crest: A talbot’s head erased proper. That would appear to be a differenced version of the arms here.

The arms on the memorial could be the paternal coat of arms, Argent a chevron between three mullets gules, as several Wilson families shown in Burke have minor differences (bordure, charge on chevron, etc.).

It is hard for me to tell whether the crest is a talbot's head or a bear's head. In either event, the head does not appear to be erased, but it is possible that could be an error by the carver.

As a possible identification for the wife’s arms, Papworth's Ordinary of British Armorials assigns Argent a lion passant on a chief sable three mullets argent to Ball, co. Northampton, granted 1613. But with no tinctures, and no biographical information being found in any of my on-line searches, it is difficult to feel any real certainty about this identification.

In any event, it is a touching monument from a couple who lost two of their children, and it is also a beautiful piece of heraldic carving. Note the care taken to show the mantling on the side of the helmet.