An Unusual Coat of Arms


I'll be honest with you. I had my doubts about the coat of arms on this next memorial. It turns out, my skepticism was unfounded. Still, it's not the usual heraldry that one expects to see. 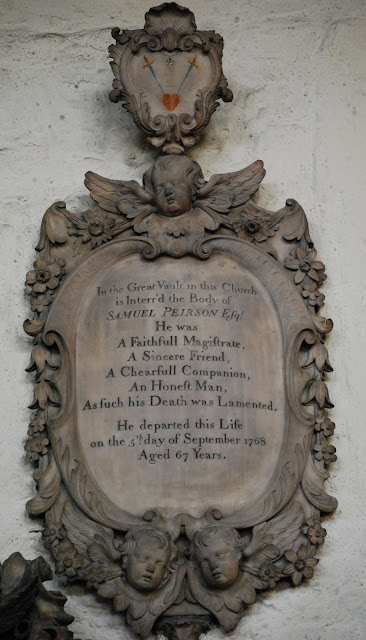 
In the Great Vault in this Church
is Interr'd the Body of
SAMUEL PEIRSON Efqr.
He was
A Faithfull Magiftrate,
A Sincere Friend,
A Chearfull Companion,
An Honeft Man,
As fuch his Death was Lamented.

It was, of course, the coat of arms above the topmost of the three cherub's heads that caused me some doubt. 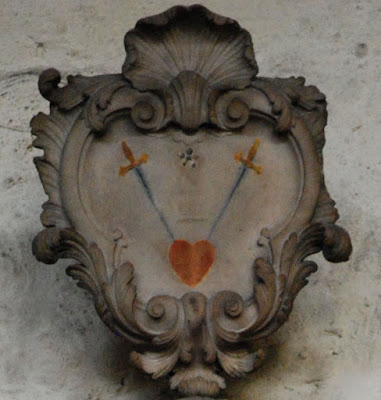 The History of the Parish Church of Saint Margaret, Westminster by Walcott (1847) blazons the arms as: Argent two swords hilted or bendy dexter and sinister piercing a heart gules in chief a mullet for distinction sable.

However, if you look closely (you can click on the picture above to see a larger photograph), the sword blades appear to azure, and the charge in chief is pretty clearly a cinquefoil and not a mullet.

Burke's General Armory cites something closer in the arms of Pearson* (Kippenross, co. Stirling). Argent two daggers in bend and bend sinister conjoined in point azure piercing a man's heart in base proper in the honour point a cinquefoil sable.

So, an unusual coat of arms, but a real (albeit rare) one. But this sort of thing is one of the reasons I truly enjoy studying and researching heraldry. You can always learn something new.


* In my, alas, fruitless, searches on-line for this individual, I have found the surname spelled variously as Peirson, Pierson, and Pearson. What's that old saying? "A foolish consistency is the hobgoblin of little minds." (Ralph Waldo Emerson)