Our next armorial memorial is dedicated to the memory of Sir Laming Worthington-Evans, 1st Baronet (1868-1931). 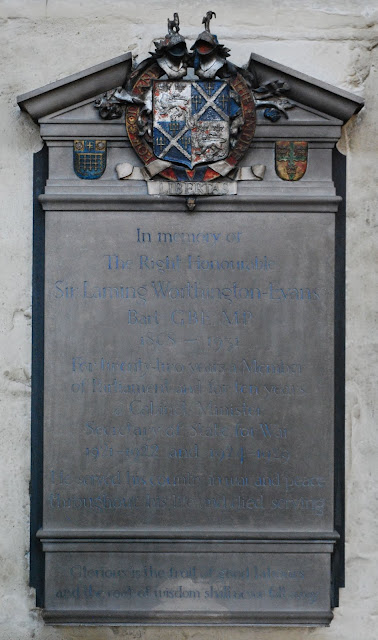 Sir Laming has a good-sized paragraph in my 1938 Burke's Peerage, Baronetage and Knightage, which outlines in more detail his political career as Member of Parliament for Colchester, his government offices during World War I, his being made Knight Grand Cross of the British Empire on June 3, 1922, and his assuming by Royal License the additional name of Worthington the day before he was created Baronet on November 15, 1916, among other things.

But, naturally, it was the heraldry that attracted my eye. 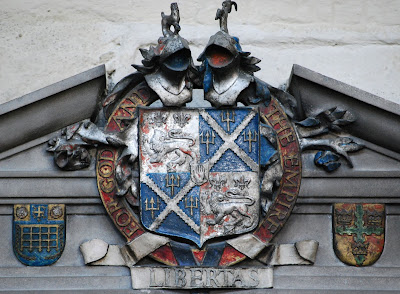 At the center top of the memorial are the arms of Worthington-Evans, flanked by the arms of the Borough of Westminster (where he spent so much of his career) (Azure a portcullis on a chief or on a pale azure between two Tudor roses gules and argent a cross flory between five martlets or) and the Borough of Colchester (for whom he served as MP) (Or four pieces of wood raguly conjoined in cross vert each side arm transfixed with a nail palewise sable ensigned by an ancient crown or the arm in base enfiling an ancient cross or and transfixed by a nail bendwise sable).

(As an aside, it seems to me that it would be less convoluted to simply blazon the main charge in the arms of Colchester as a cross raguly vert, but maybe that's just me.)

The arms of Worthington-Evans are blazoned: Quarterly: 1 and 4, Per pale argent and gules a lion passant regardant between two fleurs-de-lis and a bundle of rods banded all counterchanged (Evans); 2 and 3, Azure a saltire engrailed argent between three tridents one in chief and two in fess or (Worthington). The crests are: 1, A lion passant regardant argent the body charged with three crosses moline and resting its dexter forepaw upoin a bundle of rods banded gules (Evans); and 2, A demi-goat proper charged on the shoulder with a saltire engrailed argent (Worthington). The motto is Libertas (Liberty).

Sir Laming was succeeded in the baronetcy by his son, Sir William Shirley Worthington-Evans.