A Memorial to a Husband From His Wife


It's neither one of the biggest nor one of the fanciest armorial memorials in St. Margaret's Chapel, but it's certainly one of the more touching ones, the memorial to Austen Henry Layard erected by his wife, Enid. 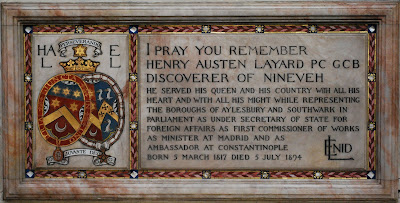 
Sir Henry Austen Layard, PC [Privy Council], GCB [Knight Grand Cross of the Order of the Bath] was, as his Wikipedia article notes, a traveler, archaeologist, cuneiformist, art historian, draftsman, collector, politician, and diplomat. he is best-known, though, as the excavator of Nimrud and Nineveh, where he uncovered a large portion of the Assyrian palace reliefs and, in 1851, the library of Ashurbanipal.

He married in London on March 9, 1869, his first cousin once removed, Mary Enid Evelyn Guest, daughter of Sir Josiah John Guest and Lady Charlotte Elizabeth Bertie. Henry and Enid Layard had no children. 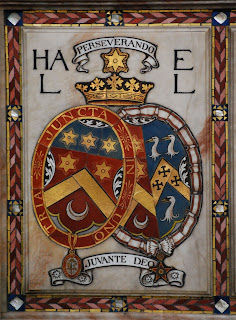 The heraldic portion of the memorial shows two shield accolée (embracing), the husband's alone on the left encircled by the insignia of the Order of the Bath, and the right with the impaled arms of husband and wife. At the top, on either side of the crest, are his initials (HAL) and hers (EL).

His arms are blazoned: Gules a chevron between in chief two mullets of six points or pierced of the field and in base a crescent argent on a chief azure three mullets or. The crest is Out of a ducal coronet a mullet of six points or. The motto (below the shield) is Juvante deo (By the help of God). A second motto (not the wife's from all that I can find) appears above the crest in Scottish fashion, Perseverando (By persevering).

It's a beautiful little memorial with some very nicely done heraldry upon it.