An Old Memorial With Confused (or, at least, Confusing) Arms


This next memorial in St. Margaret's is an older one to a father and young daughter who predeceased him. It's a lovely monument, though time hasn't always treated it well; the head and feet of the father (on the left) are now missing. 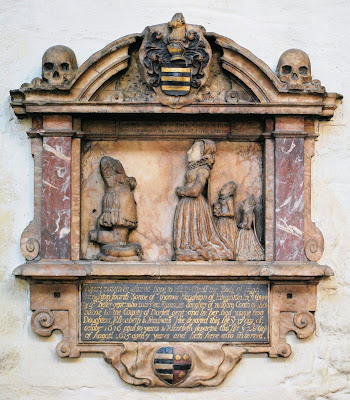 If you look carefully (and you can click on the image above to see a larger picture), you will note that the eldest daughter (kneeling right behind her mother) is carrying a skull in her hands, as a mark of her being deceased.

The inscription below the carving of the kneeling family reads (I have substituted an "f" for the "long ess", since my keyboard does not have the long ess on it):


Heere resteth in afsured hope to rife in Christ the Body of Hugh
Haughton fourth Sonne of thomas Haughton of Haughton in ye Count
y of Chefter gent: who married Fraunces daughter of William Cooth of Sher
borne in the County of Dorfet gent: and by her had issue two
daughters, Elizabeth & Fraunces  Hee departed this life ye 17th day of
october 1616 aged 50 yeares & Elizabeth departed this life ye 28th day
of August 1615 aged 7 yeares and lieth here also interred.

Just above the kneeling figures of the family members is the inscription:

The monument bears two coats of arms: the paternal arms with crest at the top, and a marital shield impaling the husband's arms with his wife's at the bottom. 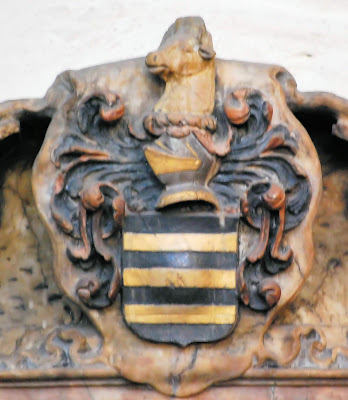 The History of the Parish Church of Saint Margaret's, Westminster, published in 1847, blazons these arms as: Sable, in chief for distinction, a martlet argent, three bars of the same. (A martlet is the difference for a fourth son.)

A more typical blazon for these arms would be: Sable three bars argent in chief a martlet (also argent) for difference.)

Unfortunately, the martlet seems to be missing here, and the bars are painted gold, or or.

So it would appear that the bars being gold here is a (comparatively) recent error. The bull's head crest listed in Burke may have lost all of it its paint, nothing remaining of either the black on the head or the horns and bars in white.

But while the bars of the husband's arms are here closer to their correct argent, and if you look closely you can see something in the chief that might be a martlet (now overpainted black) (again, you can click on the picture above to see the larger image), the wife's arms only retain the red of the field, the fess having become black and the escallop shells gold.

Burke's General Armory has only one entry for Cooth, and he gives no county (we'd be looking for Cooth or Coothe in Sherbourne, co. Dorset): Gules a fess between three escallops or. Cooth does not appear at all in the Visitation of Dorset conducted in 1623.

So it may be that the modern painter followed Burke's blazon for the color of the shells, but that fess here is quite clearly black, and not either white (as it was blazoned in 1847) or gold (as it appears in Burke).

So there you have it; an early 17th Century memorial to a beloved husband and daughter, but with the arms of both husband and wife mispainted in one way or another in the years since.

Still, it's a beautiful monument, with a great use of heraldry.