I pretty regularly watch the television series Antiques Roadshow, both the English and the American versions. Partly because of my interest in history, partly because I learn a lot from listening the appraisers, and, yes, a little bit because I hope that someday soon something I own (besides my heraldry books) will be found to be worth  lot of money. (The fact that this latter has not yet happened, and realistically, probably never will, has done nothing to dampen my enthusiasm.)

Anyway, we were watching the latest episode of the American version of the series on our local Public Broadcasting Service station, KERA, and one of the items that had been brought in for an appraisal was one that immediately caught my eye: a piece of armorial china. So I whipped out my cell phone (whatever did we do in the olden days when we didn't have telephones in our pockets that would also take pictures?) and took a shot of the screen: 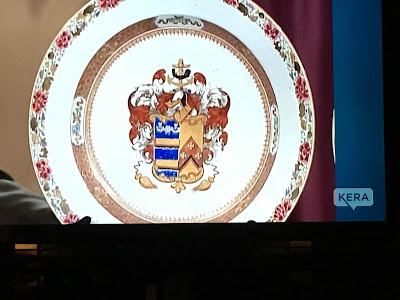 The appraiser spent a fair bit of the few minutes he had on-screen talking about the Chinese export trade and the figures in the white cartouches on the gold circle inside the rim of the plate. (My memory of what he said about them is that on china for use in China, there would be four, or perhaps six, different figures. On this plate, for the European trade, there are only two, which are repeated. This last was apparently something that would never have been done for use in China. The feeling that I got from his description was of a number of Chinese porcelain painters sitting around discussing among themselves that they didn't have to put in more effort than necessary, because the "foreign devils" would buy anything. Hahahahahahaha. But maybe I'm reading too much into a sixty to ninety second appraisal.)

Anyway, my interest, of course, was to see if I could identify the martial arms on the plate. And, sure enough, a quick review of Papworth's Ordinary of British Armorials, Burke's General Armory, and Fairbairn's Crests came up with the following:

The husband's arms (on the dexter, or left for the viewer, side of the shield):

Martin: Azure two bars or in chief a rose between two bugle-horns (no tincture given; on this plate they are argent). (Papworth)

Martin: Azure two bars or in chief a rose between two bugle-horns of the first. (Nope, nope, nope. That makes the charges in chief azure on azure, and thus effectively invisible. That cannot be correct.) (Burke)

The wife's arms (on the sinister, or right for the view, side of the shield):

Peck: Or on a chevron gules three crosses patty of the first. (Papworth)

Peck (Samford Hill, co. Essex, and Wood-Pelling and Methwould, co. Norfolk, temp. Charles II.). Or on a chevron gules three crosses formée of the field. Crest – Two lances or in saltire headed argent pennons hanging to them gold each charged with a cross formée gules the spears enfiled with a chaplet vert. (Burke)

The crest, An anchor or surmounted by a bugle-horn sable does not appear in Fairbairn’s Crests.

I have been unable to find which Mr. Martin married which Miss Peck, or when, or where, but it's nice to know that they were able to set their dinner table with a setting of nice chinaware with their marital coat of arms upon it.

And as I have noted many times before, you can find heraldry everywhere, even when you're just sitting of an evening relaxing while watching TV, with no expectation of seeing a coat of arms.