An Ornate Memorial With Complex Heraldry


There is quite a range of heraldic memorials in St. Margaret's Chapel, Westminster, from those just about a hundred years old to those much older. This next memorial is one of the latter, in addition to being one of the more ornate memorials there. 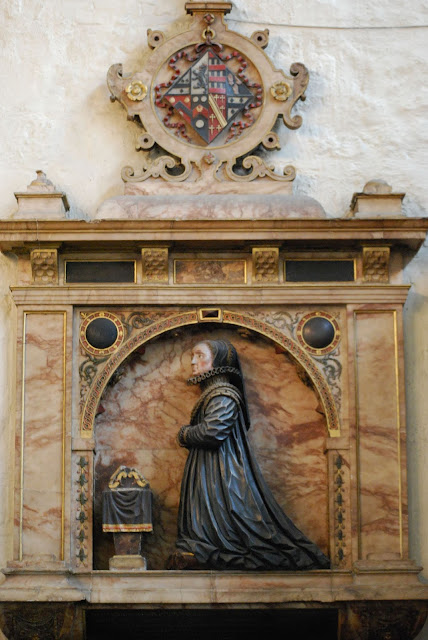 This is the memorial to Blanche Parry, daughter of Henry Parry of New-Court, Hereford, who died February 12, 1589, aged 82. She was Chief Gentlewoman of Queen Elizabeth's Most Honourable Privy Chamber and Keeper of Her Majesty's Jewels.

That death date makes her a contemporary of my 11th great-grandmother, Margaret (Haslonde) Bray, who was buried at St. Margaret's on March 28, 1588, and of my 10th great-grandparents, Thomas and Mary (Bray) Whitney, who were married at St. Margaret's on May 12, 1583, and who were both buried there (in 1637 and 1629, respectively). It is entirely possible that Thomas and Mary Whitney watched this memorial being erected in 1595. How cool is that?

Anyway, it was, of course, that great coat of arms at the top which really caught my eye. 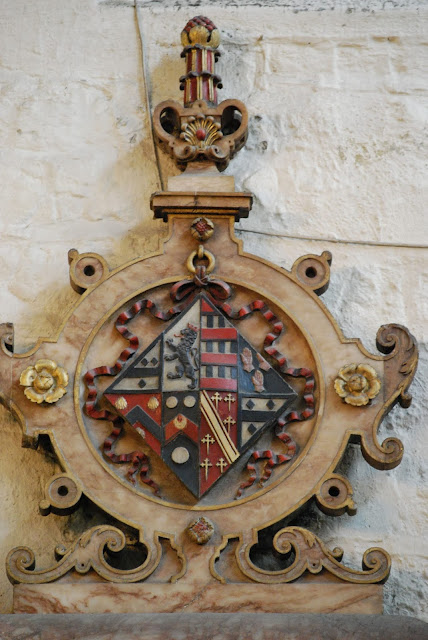 The arms are blazoned in The History of the Parish Church of Saint Margaret, Westminster, as: Quarterly: 1 and 8, Argent a fess between three lozenges azure; 2, Argent a lion rampant azure; Gules; 4, Azure three hands couped or; 5, Gules a fess azure between three escallops or; 6, Sable a fess gules between three pellets; 7, Gules a bend or between six crosses crosslet sable.

Obviously, there are several discrepancies between that blazon and what we see on the shield above.

Burke's General Armory lists two slightly different coats of arms for Parry of Hereford: Argent a fess between three lozenges sable and Argent a fess between three lozenges within a bordure azure. The lion in the second quarter appears to be langued and crowned gules. The gules of the third quarter is carved and painted here as Gules three bars paly argent and (sable/azure). The "fesses" in quarters five and six are pretty clearly carved as chevrons, and that in the sixth quarter is charged with a crescent (which here may be be the mark of a second son). The bend in the seventh quarter is painted as cotised, and the crosses crosslet fitchy are painted or rather than sable.

In a complete turnabout from the usual situation (finding a reasonable amount of information on the father, but much, much less on his daughter), I've been having a hard time tracking down Henry Parry of New-Court (or New Court), Hereford. The family does not appear in the Visitation of Hereford of 1569, nor in that of London of 1568. Most of the references on-line to him relate to his daughter Blanche (she apparently died a very well-regarded, and wealthy, woman! See, e.g., https://en.wikipedia.org/wiki/Blanche_Parry, https://www.bbc.com/news/uk-wales-42805908, and https://books.google.com/books?id=BXOSaJMcymcC&pg=PT339&lpg=PT339&dq=blanche+%22henry+parry%22&source=bl&ots=SELP089y6y&sig=d_yycyPAshhPzFuCGq8RalhasU4&hl=en&sa=X&ved=0ahUKEwiWjcinp_TbAhURR6wKHXw1BpMQ6AEIVDAG#v=onepage&q=blanche%20%22henry%20parry%22&f=false, among others), and I've not found his coat of arms anywhere, so it is very hard to discover how many of these discrepancies are due to mistaken overpainting in the centuries since the monument was erected and how many to other factors.

Still and all, it's a beautiful monument to a woman who spent much of her life serving her Queen, and who died in service to that monarch.