I have managed to find (and download) a .pdf copy of The History of the Parish Church of Saint Margaret, in Westminster by Rev. Mackenzie Edward Charles Walcott, published in 1847, which, among other things, gives a brief (very brief!) description many of the memorials and monuments in St. Margaret's Chapel. This is going to save me ever so much time in tracking down exactly who is being memorialized and how their coats of arms are blazoned. (It is by no means a panacea, but still, some of the basic research is already encapsulated in this little volume, and I hope that we all will gain something from that.)

Continuing my "amble" through the ambulatory of the chapel, I ran across this particularly nice carved marble memorial. 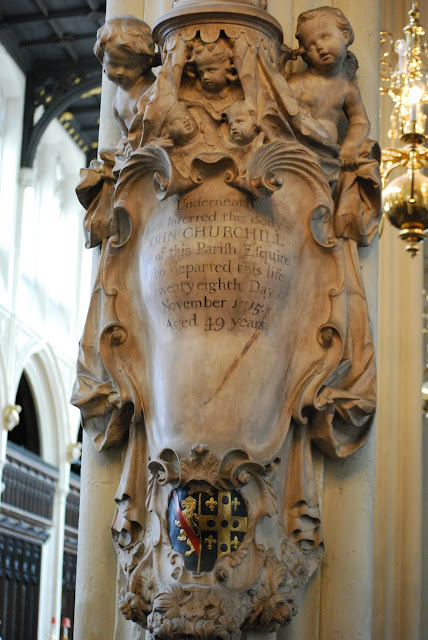 Underneath
Lieth Interred the Body of
JOHN CHURCHILL
Late of this Parish, Esquire
Who departed this life
the Twenty eighth Day of
November 1715.
Aged 49 years.

His coat of arms, carved in relief and painted, are blazoned in the book above as: Party per pale. Sable; a lion rampant argent debruised with a bendlet gules. 2. Sable; on a cross or, four pellets between four fleurs-de-lys argent.

I would change the blazon a little to better conform with current practices: Per pale: 1, Sable a lion rampant argent debruised by a bendlet gules; 2, Sable on a cross or between four fleurs-de-lys argent five roundels sable. 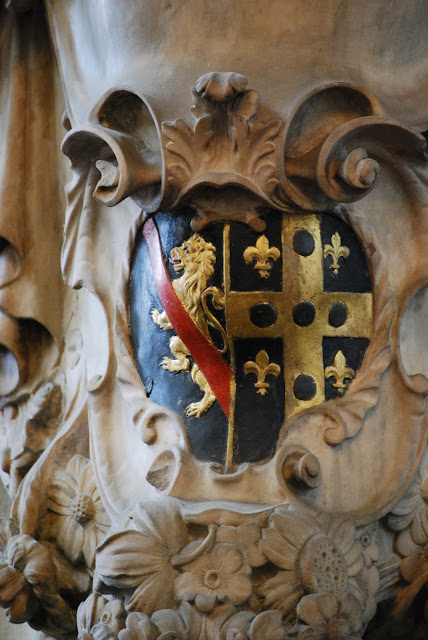 Someone has clearly painted the lion and the fleurs-de-lys as gold since 1847! But they really should be argent (or white).

The Churchill arms (to dexter, on the viewer's left) are given in Burke's General Armory as: Sable a lion rampant argent debruised with a bendlet gules.

The arms on the sinister side of the shield (to the viewer's right) are given by Papworth's Ordinary of British Armorials as Banks (London, baronetcy 1661-99), Sable on a cross or between four fleurs-de-lys argent five ogresses.

I have not been able to find John Churchill, d. 1715, in the Dictionary of National Biography or any of the usual on-line sources. (There is a plethora of information about John Churchill, 1st Duke of Marlborough, but though a contemporary, he is not the John Churchill we're looking for here.)

Nor have I found a likely identification for his wife, who seems not to be either of the daughters of Sir John Banks, baronet. Mary Banks married John Seville, and her sister Elizabeth Banks married Heneage Finch, 1st Earl of Aylesford.

Still, though, it's a beautiful monument, with its little "garden" of flowers beneath the shield.