I found these next two armorial memorials in St. Margaret's Chapel, Westminster, to be especially interesting because they appear to be of a new pattern of such memorials. They are dated 1978 and 1990, respectively, but are certainly of a particular type, a horizontal rectangular stone slate (I think. they look like slate, but I suppose they could just as easily be molded concrete stained or colored to mimic slate) containing the memorial language with a square notch extending from the center of the upper edge on which the coat of arms is carved and painted. 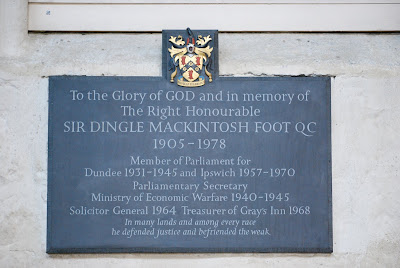 His arms are beautifully carved and painted: 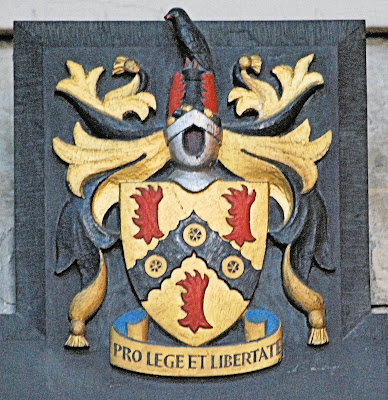 The arms would be blazoned Or on a chevron engrailed sable between three lion's jambes erased gules three wheels or. The crest is something like Atop a tower sable sustained by a pair of lion's jambes gules a Cornish chough proper (that is, sable beaked and legged gules). The motto is Pro lege et libertate (For law and liberty). 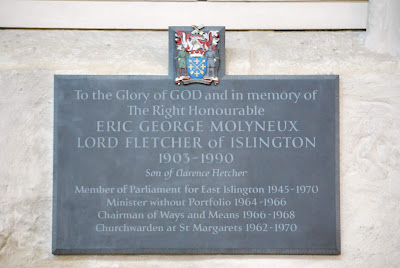 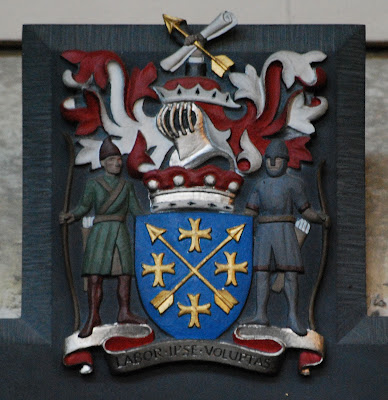 The arms (surmounted by the coronet of a baron), and once again beautifully carved and painted, have echoes of the ancient arms of Molyneux, Azure a cross moline or, as the well as the crest, which here (as then) issues from a cap of maintenance, or chapeau.

The arms here would be blazoned Azure two arrows in saltire points to chief between four crosses moline or. The crest is Issuant from a chapeau gules turned up ermine a cubit arm proper vested sable the hand holding a rolled scroll bendwise sinister argent surmounted by an arrow bendwise point to chief or. His supporters are bowmen from two different periods of English history, and the motto is Labor ipse voluptas (Labor itself is a pleasure).

I always find it interesting to see the various styles, and the evolution of styles, of armorial memorials, and these two are, I think, lovely examples of a modern form of such. Don't you?