There are, naturally enough, a number of carved stone armorial memorials in St. Margaret's Chapel, Westminster. 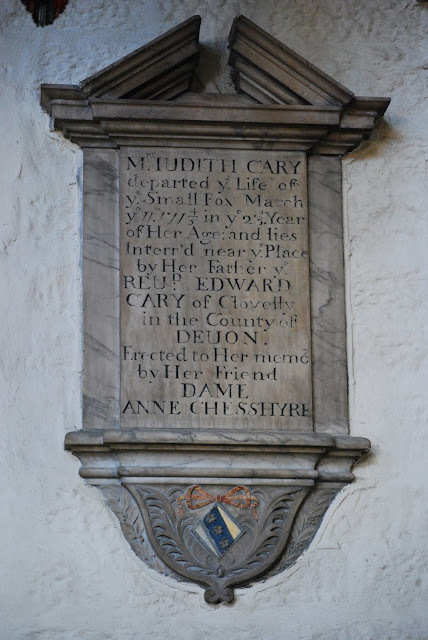 Mrs. IUDITH CARY
departed ye Life of
ye Small Pox March
ye 11th 1714/5 in ye 23d Year
of Her Age: and lies
Interr’d near ys Place
by Her Father ye
REUD. EDWARD
CARY of Clovelly
in the County of
DEUON.
Erected to Her memoy
by Her Friend
DAME
ANNE CHESSHYRE

And, of course, I probably wouldn't have included this memorial here if it didn't have a coat of arms on it: 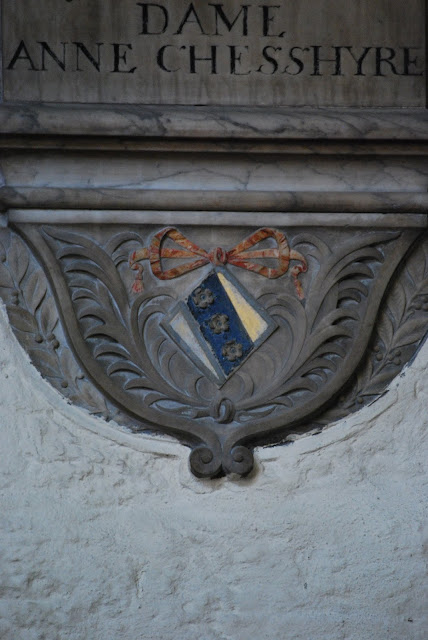 (Yes, I know that it looks like someone has at one time or another colored the field here as or, and the coat is so blazoned in The History of the Parish Church of Saint Margaret, in Westminster.  Still, I have shared other coats of arms which have been miscolored before now, most notably this one: https://blog.appletonstudios.com/2009/02/youd-think-historians-would-do-better.html. Given that example, don't give me any static about this one!)

In case you are wondering, Clovelly, Devon, is in the west of southern England on the southern shore of Barnstaple or Bideford Bay, about one-third of the way between Hartland Point to the west and the city of Bideford to the east.

Edward Cary and his daughter Judith appear in The Visitations of the County of Devon Comprising the Heralds' Visitations of 1531, 1565, and 1620, with additions by Lieutenant-Colonel J.L. Vivian, with these entries:


Edward Cary married a daughter of Thomas Pointington of Penecot.


It is so sad to see a life taken so young.