Wow! I Hadn't Realized I Had Missed Sharing These.


You know how it is, you are just going along and living your life and getting stuff done and making progress on some of your to-do projects, and then something happens that throws you completely off track, and by the time you're back on your feet you've completely forgotten about where you were and what you were going to do, and so you've skipped entirely something? And a few years later, you run across the fact that you have completely spaced on something and now you have to go back and begin again?

Yeah, that's never happened to me, either.

Way back in March 2015, I had posted that I was going to be taking a short leave of absence from posting owing to breaking my ankle in the yard here ("I fought the yard, and the yard won") because, among other things, it had become very difficult to get upstairs and sit at my computer. (See my post of March 27, 2015 at https://blog.appletonstudios.com/2015/03/a-short-i-hope-hiatus-from-posting.html for more details on this "incident" which has had such an effect as to blot from my mind some of the posts I was going to create back then.)

In any case, that hiatus interrupted a somewhat slapdash series I had been doing on the heraldry I had photographed in and around London, England in the fall of 2014. And in the process of doing another big project (I've decided to try to organize many of my photos of heraldry taken over the years into a single folder on my computer that amounts in essence to an armorial of coats of arms that I have seen and photographed), I discovered that I had, in fact, failed to continue that series of posts of heraldry found in and around London.

So here I am, three years later, finally taking up pen (keyboard?) in hand and writing about some of the coats of arms that I can identify (and then adding them to my folder of "heraldry I have seen").

So to begin anew:

We started out early one morning to visit a specific church in the City of Westminster. 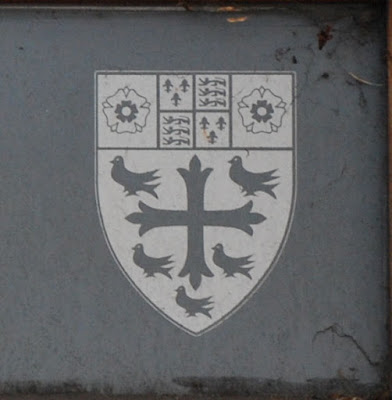 No, the arms of the City of Westminster, though they also contain "on a chief [an x] between two roses" are, as you can see, quite different: 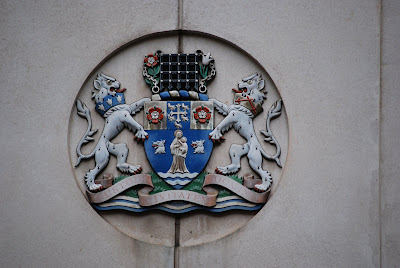 Here (above) they are as depicted on the wall of the City Archives ... 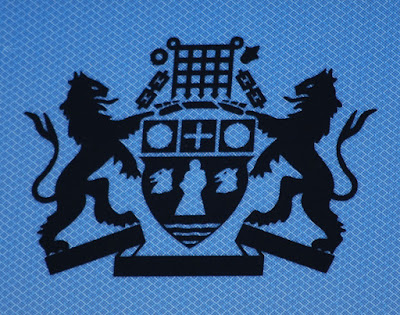 And here, drawn in a very modern rendering on a temporary wall around a construction site. (I have cropped out the words "Welcome to Westminster" that were also on the sign.)

And, frankly, it is examples like these two depictions, classic and modern, that I like to use when I see people arguing to replace an "outdated" coat of arms with a modern logo, as a way to demonstrate how heraldry is not a static art, and that a coat of arms can be updated to appeal to new tastes without tossing the arms into the dustbin of history to be replaced by something completely different, which itself may have a short shelf-life and itself need to be replaced in just a very few years.

Anyway, "Welcome to Westminster!" I hope that you will enjoy the next several posts of some of the heraldry to be found there.