On the other side of the street behind the Houses of Parliament in London, and standing next to Westminster Abbey, is the (comparatively) little chapel of St. Margaret's. 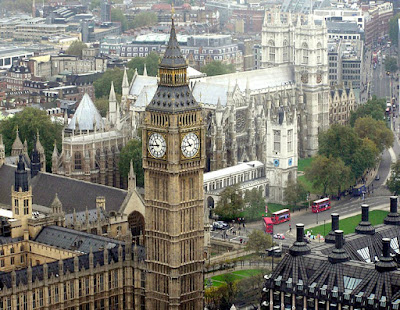 You can often see St. Margaret's in flyover pictures of the Houses of Parliament with the Elizabeth Tower, which houses the bell known as Big Ben, and of Westminster Abbey. In the photograph here, St. Margaret's is the white building with the attached tower right next to the two red double-decker buses. So you can see how it can often be overlooked, as people generally are much more interested in the two major landmarks between which it is sandwiched and by which it is dwarfed.

We were there (putting off our visit to the Abbey for earlier another day, when the line to get in was shorter) because it happens that I have a familial relation to St. Margaret's. A couple of my 11th great-grandparents (John Bray and Margaret Haslonde) were married and buried at St. Margaret's, and their daughter (Mary Bray) was baptized, married, and she and her husband Thomas Whitney (my 10th great-grandparents) were buried there. So you can see that I had a Very Good Reason™ for visiting.

St. Margaret's Chapel was founded not too long after the establishment of the Abbey next door because, as the website of the Chapel notes, "as the monks of the newly-founded monastery of St. Peter in Westminster were disturbed by the people of Westminster who came to hear Mass. So the monks set about building a smaller church next to the Abbey where the local people could receive all the sacraments and ministrations of the Church, thus leaving the monks in the Abbey undisturbed. The church was dedicated to St Margaret of Antioch about whom little is known, though her cult was extremely popular in the middle ages."

While we were there, soaking up the atmosphere of this church where some of my ancestors were baptized, married, and were buried, I (naturally enough) noticed a lot of heraldic memorials in the chapel, and over the next few posts, I will share some of these with you. (Not all of them, by any means. I had photographed less than half of the building when I was asked to stop photographing memorials, and it was only then that I saw the small sign that requested people not take pictures. I don't think it is strictly enforced; there were a lot of cell phones and cameras taking pictures. I think I probably just exceeded their limit. So when I was asked to stop, I stopped. But since I wasn't asked to delete the ones I had already taken, I feel that I can share them with you here in this non-commercial setting.)

So, to begin, let's start with a couple of brass memorials. Here's the first one: 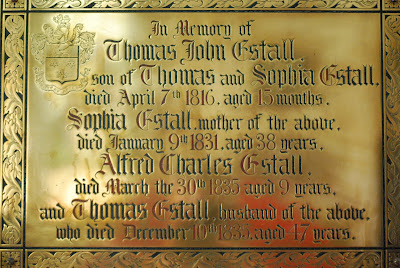 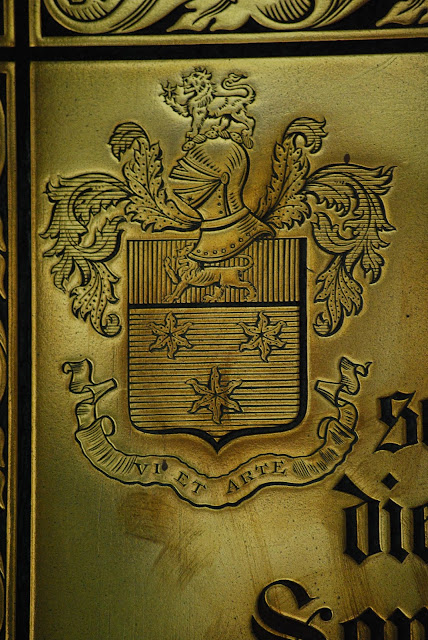 The arms are hatched, so a blazon would be: Azure three estoiles or on a chief gules a lion passant argent. The crest is: A lion passant argent maintaining in his dexter forepaw an estoile [or]. The motto beneath the shield is: Vi et arte (By strength and art).

I was entirely unable to find these arms in Burke's General Armory, or in Papworth's Ordinary of British Armorials, nor have I found the crest in Fairbairn's Crests, and the motto cited in Fairbairn's is attributed only to Chisholm, Ferguson, and Stevens. No Estall.

So I think it's safe to say that the family was originally French, though I cannot do more than speculate as to how they came to England, or when, or why they are memorialized in St. Margaret's Chapel in the heart of London, England.