A Brass Memorial to a Peer


The second brass memorial to share from St. Margaret's Chapel in Westminster was this one: 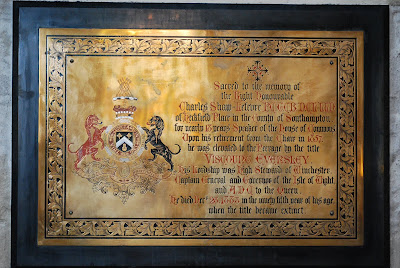 Sacred to the memory of
the Right Honourable
Charles Shaw-Lefevre P.C. G.C.B. D.C.L. L.L.D.
of Heckfield Place in the County of Southampton,
for nearly 18 years Speaker of the House of Commons.
Upon his retirement from the Chair in 1857,
he was elevated to the Peerage by the title
Viscount Eversley.
His Lordship was High Steward of Winchester,
Captain General and Governor of the Isle of Wight,
and A.D.C. to the Queen.
He died Decr 28, 1888, in the ninety fifth year of his age,
when the title became extinct. 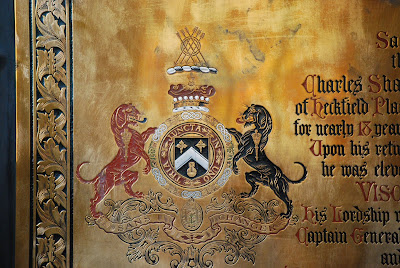 These arms are found in Burke's General Armory and are given as follows:

Shaw-Lefevre (Viscount Eversley). Sable a chevron between two trefoils slipped in chief argent and a bezant in base issuant therefrom a cross paty or. (This last charge is more generally, and succinctly, blazoned a mound. Franklyn and Tanner, in their An Encyclopaedic Dictionary of Heraldry, give the following: mound: [M.E.] lit. the earth; hence, the regal orb; hence, a representation of this: always equatorially banded with a rising demi-meridian ensigned with a cross paty.) Crest: Six arrows interlaced saltirewise three and three proper with an annulet or. Supporters: On eigher side a talbot, that on the dexter gules on the sinister sable each charged on the shoulder with a mace erect gold. Motto: Sans changer (Without changing).

Charles Shaw-Lefevre, Viscount Eversley, 1794-1888, has an entry amounting to a full page in the Dictionary of National Biography (https://en.wikisource.org/wiki/Shaw-Lefevre,_Charles_(DNB00)), which discusses his career in some detail, as well as informing us that he married in 1817 Emma Laura Whitbread, the daughter of Samuel Whitbread M.P. for Bedford. She died in 1857. They had six children: three sons, all of whom died young; and three daughters. It was the death of the male heirs which caused the extinction of the title upon the death of Charles in 1888.