A Monument to a Deceased Son


On one wall inside St. Margaret's Chapel is found a white marble memorial with a tri-colored mosaic border around it, containing a coat of arms and a short poem by American jurist Oliver Wendell Holmes. 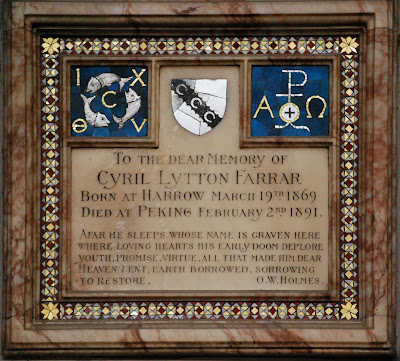 Cyril Lytton Farrar was the son of the Revd. William Frederic Farrar, Rector at St. Margaret's from 1876 until he became Dean of Canterbury. More information about father and son can be found on-line at https://www.westminster-abbey.org/abbey-commemorations/commemorations/frederic-and-cyril-farrar/

The beautifully simple arms of Farrar are: Argent on a bend engrailed sable three horseshoes argent.

A beautiful memorial to a son who died young (age 22) in a far and distant land.