If you are going to try to impress people by displaying your arms all over your house, on the walls and ceilings, there may be places where you just don't want everything to be quite so much in everyone's face.

In one of the upper rooms at Mount Stuart (a game room, really, for just relaxing) there was a set of wooden chairs along one wall that did not display the Crichton-Stuart coat of arms on them.

No, they just display a painted shield shape with the three crests used by the family underneath the coronet of a marquess. 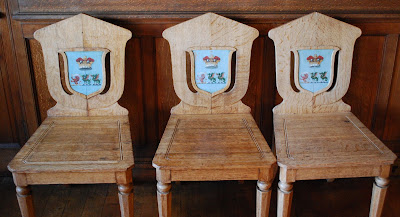 The three crests (from left to right) are:

Crichton: A wyvern wings elevated and addorsed fire issuant from the mouth all proper

and Herbert: A wyvern wings addorsed vert in the mouth a sinister hand couped gules 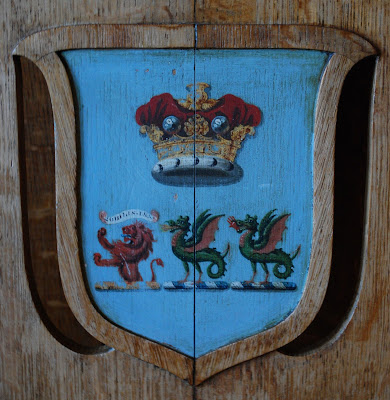 Just the sort of heraldic display, really, that you could do in your own home, even if you weren't entitled to a coronet and/or had only one crest. Properly scaled and painted, it could make a nice, even slightly understated, exhibit.

It also wouldn't require obtaining a second mortgage on the house to pay for it.

Just a thought. Do with it what you will.

But I thought these chairs at Mount Stuart created a very pleasing heraldic atmosphere.